Chess and Spaghetti: Best of Jan-March 2015


In early 2015, we enjoyed our Christmas presents, got really into reptiles, appreciated nature, and learned how to make tamales.


We attended a "Repticon" where we got to see all kinds of reptiles and exotic pets: snakes, chameleons, bearded dragons, turtles, giant Centipedes and more. We have been researching snakes and decided to get the boys Ball Pythons. They are very docile, non-aggressive snakes, quite personable, easy to care for, and reasonably sized (4-5 ft full grown). The boys were thrilled with their baby pythons, only three months old and able to fit in their palm. Unfortunately, one died after about a month, probably because they refused to eat their frozen mice week after week. By the time we realized that they were too young to go weeks without feeding, it was too late for one of the snakes. However, we are now taking good care of our remaining snake, Slither. We usually feed it one live mouse a week. The first time was a tearful experience for the boys, but they realize that snakes are living creatures who need to live too. 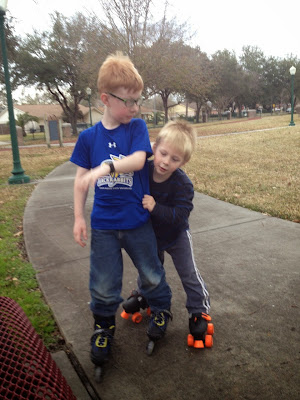 For months, we have had the pleasure of watching our very own spider, who made her home on our balcony between the overhang and the hand rail. Affectionately named Charlotte, she was wonderful to watch - herself a large-abdomened, impressive arachnid, her web a shimmering demonstration of nature's beauty and strength. We were observers of all of her activities: her daily snooze up by the roof rail, her nightly repairs to her web as she slowly lowered herself on her thread to the right height and maneuvered her way horizontally on remaining strands of her web. Sometimes she snipped the whole web off and started over. We also watched her wrap her prey and eat it. On occasion, we found bugs to add to her web, and she was usually quite interested in them. One morning, we found the web covered in sparkling dew, just like something out of Charlotte's Web. Unfortunately, she has since disappeared - perhaps she got old, got eaten by a bird, or simply moved on. Our morning exits aren't quite the same without her! 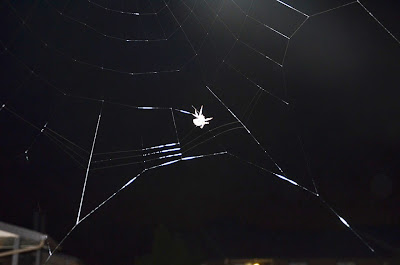 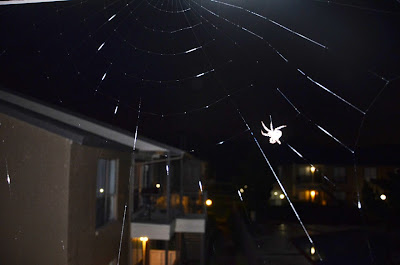 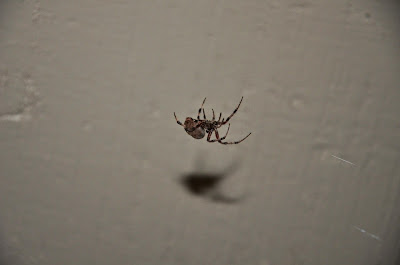 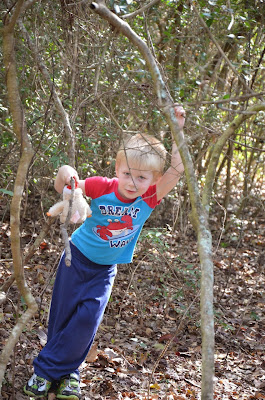 We decided to try our hand at making home-made tamales, and they turned out really well. I mixed up the "masa" (cornmeal dough with broth, oil and spice) and shredded my slow-boiled pork carnitas. Then we were ready for the assembly line. First, I patted some masa onto a corn husk. Then Josh added the pork filling. Misha carefully rolled up each tamal. Sebby took the wrapped tamales to add to our quickly-growing stack, and ran back and forth helping us with things we needed. The tamales turned out delicious - especially with green chili sauce (which would have been better with fresh ones over canned, but it was still yummy). I used this tutorial.

Valentine's Fun: We folded dozens and dozens of cute origami treasures for the boys to give out at school with their candy and cards... nodding puppies, flying birds, jumping frogs, kissing lips, and dragons that don't do anything, just look cool. 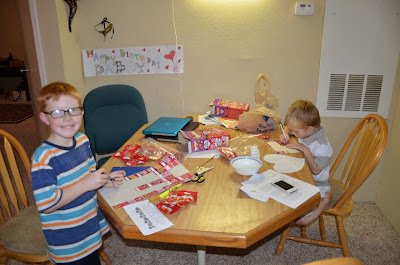 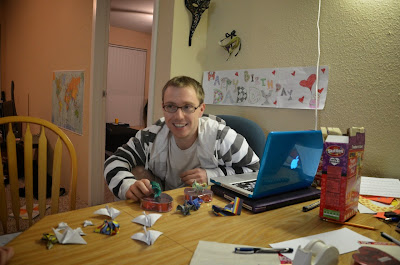 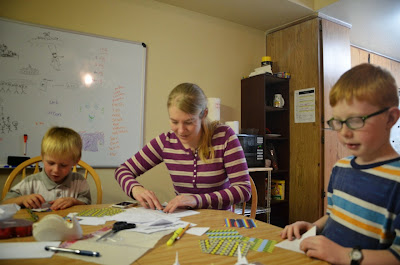