School Success and Learning All Around 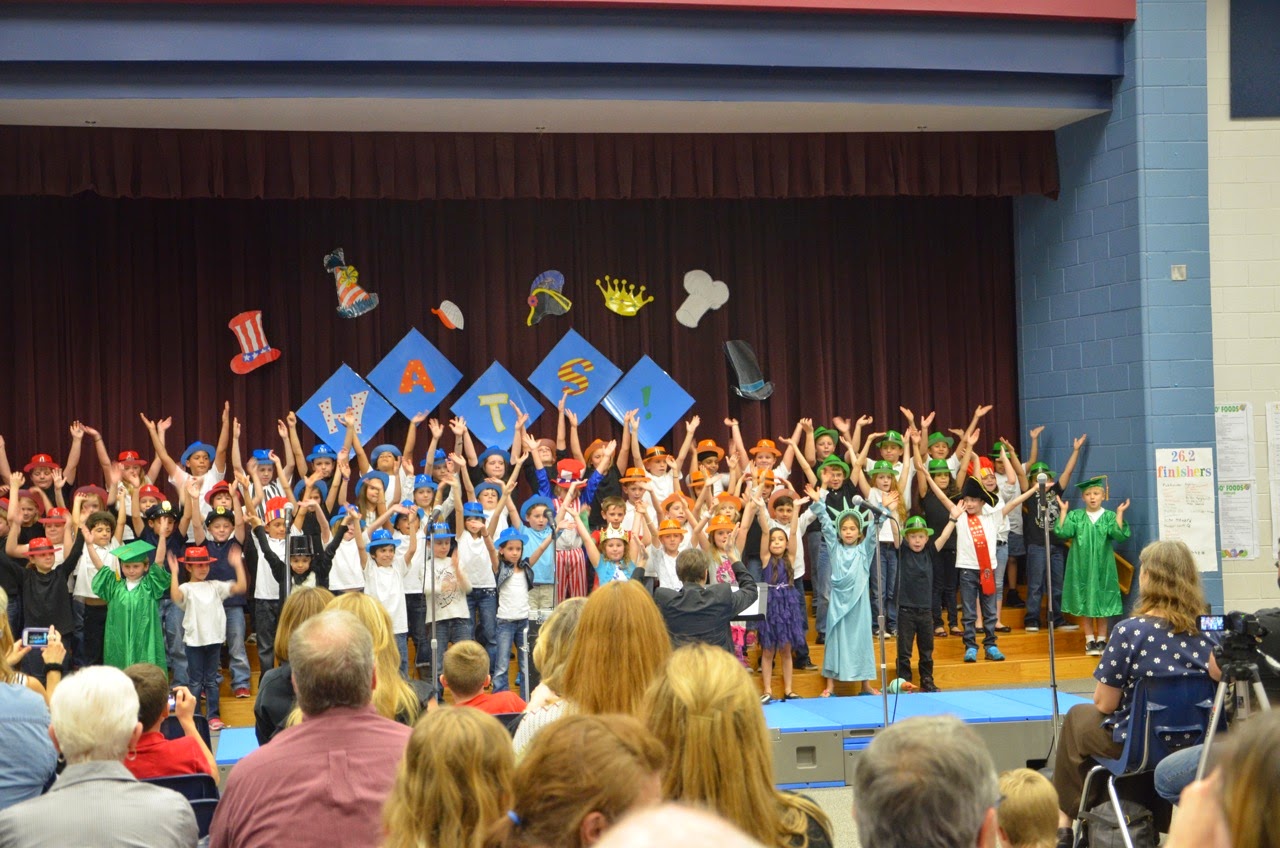 The school year is wrapping up, and both boys have been doing lots of activities, both in school and at home. Misha's second-grade class recently put on a concert (a mini musical) titled "Hats!" about the different hats we wear and the possibilities there are. Misha was a smiling sensation in the front row. 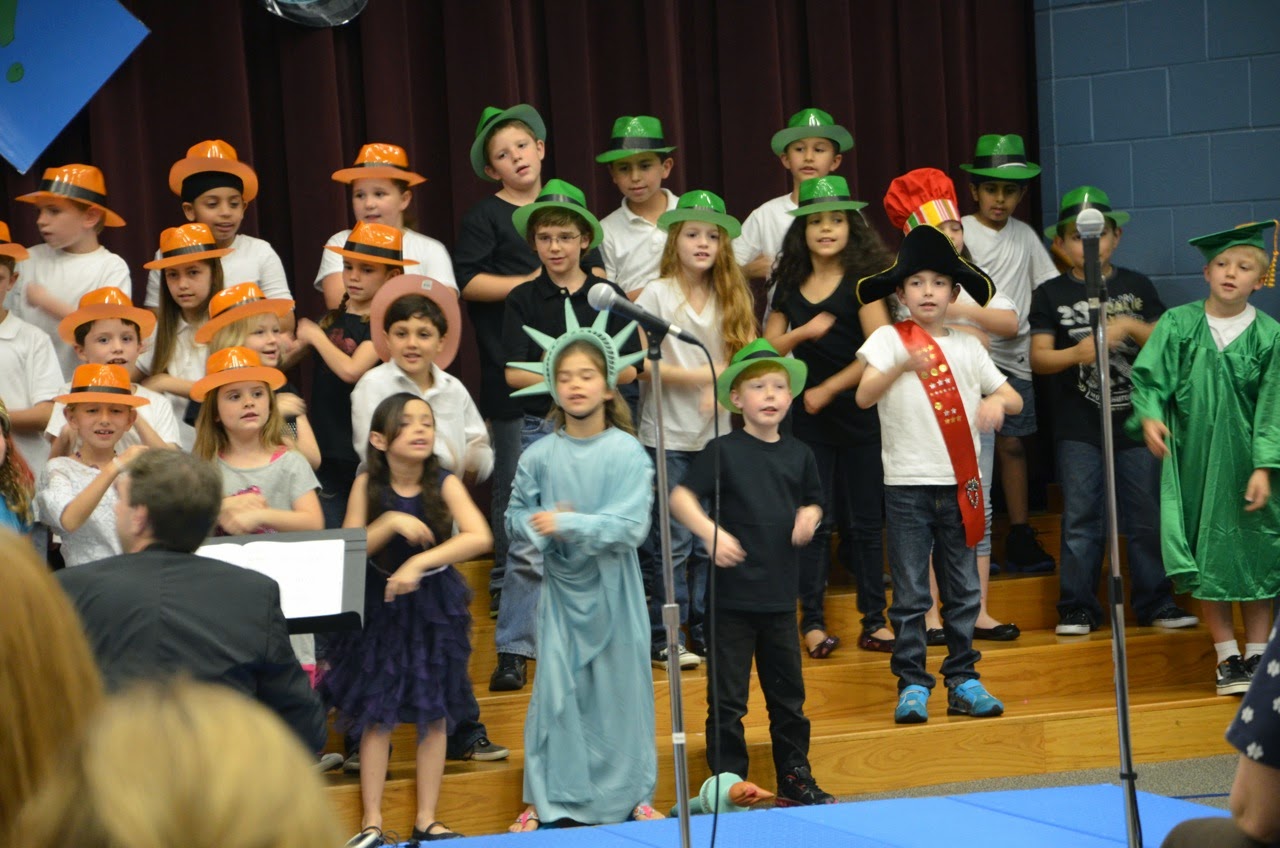 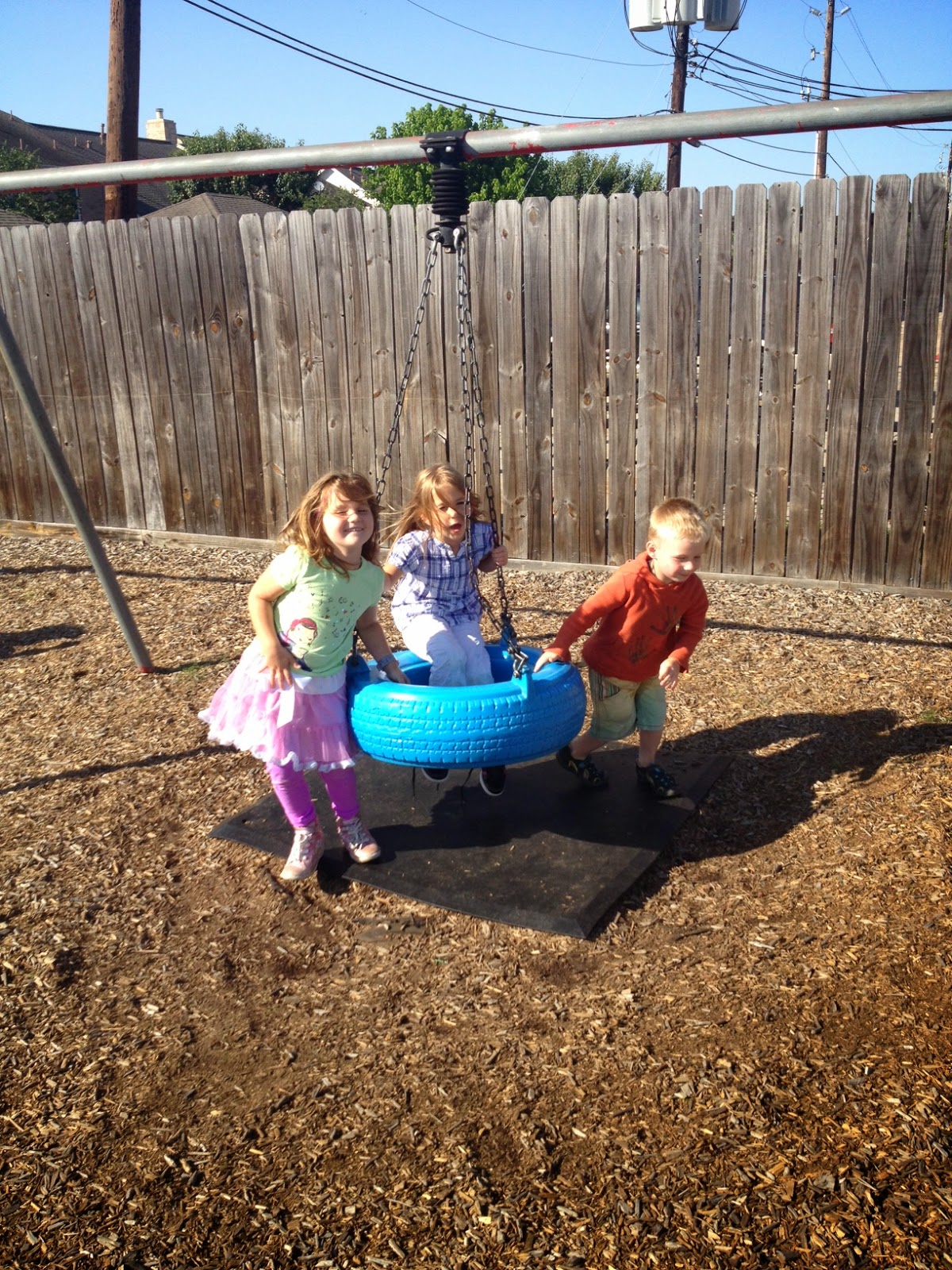 Sebby now attends a new preschool which I really love, as they are always doing projects. They've already hatched out butterflies and now they are observing tadpoles as they grow. They read tons of books and do tons of art; he comes home with paint in weird places, like his ankles, which I also love. They go outside a lot, and Sebby loves the playground so much that he tells me not to come pick him up when he's outside! 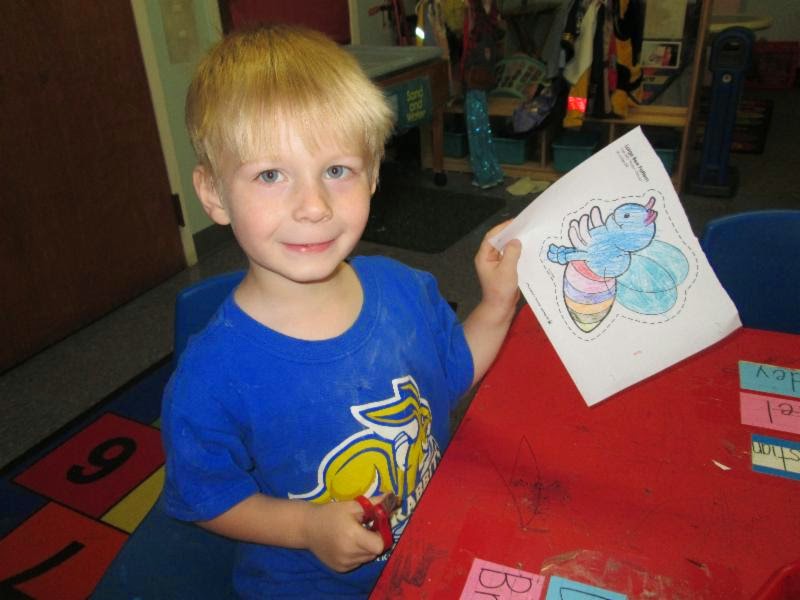 Both boys made mother's day gifts at school and were bursting with excitement to give them to me, although Sebby already whispered to me conspiratorially that he was bringing me "kisses - chocolate kisses!" several days before. Misha brought me a wonderful homemade card with a poem in cursive and a flower planted in a pot that he painted himself. Sebby brought me a "spoonful of kisses," plus a card, a hand-print hug, and a funny "Mystery Mom" document in which he wrote everything he knew about his mama, like how I weigh 56 pounds and my favorite drink is cherry juice. 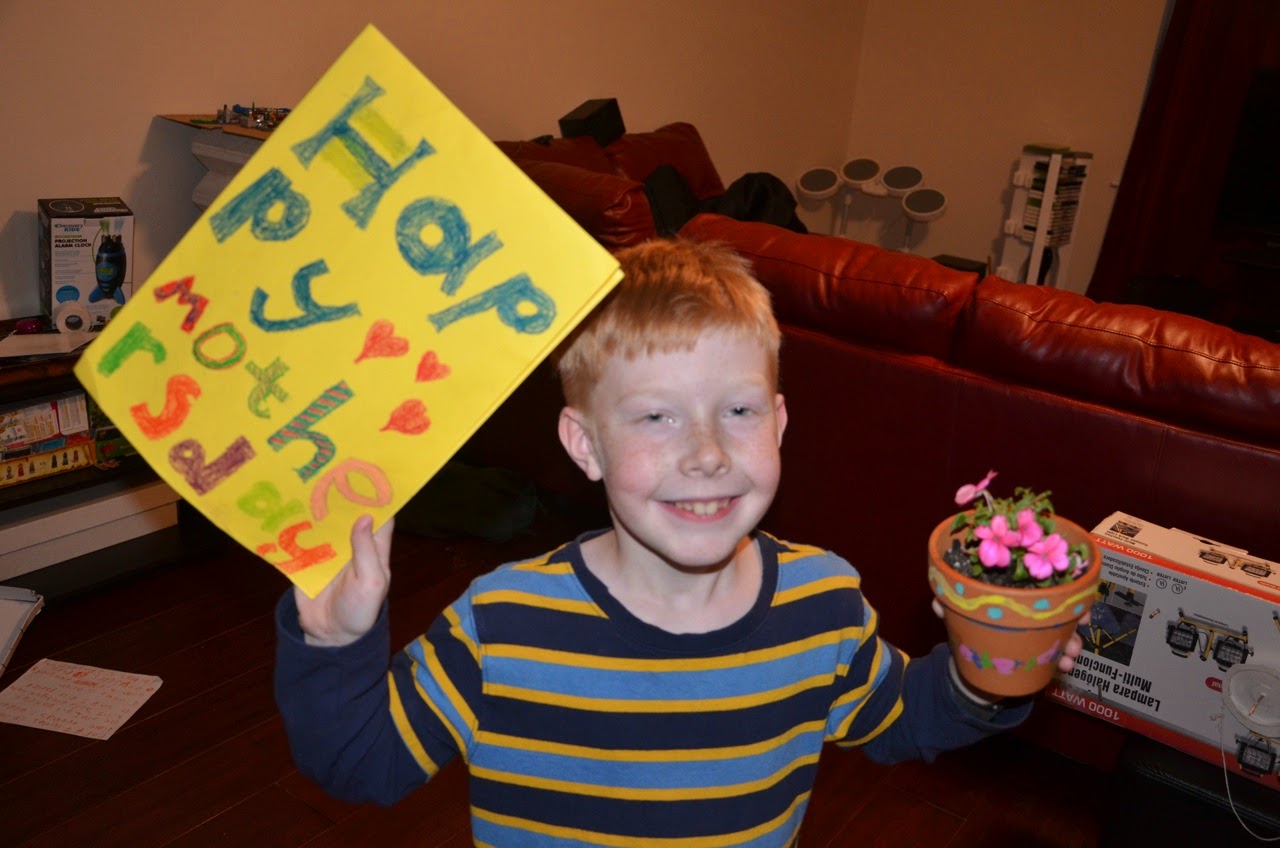 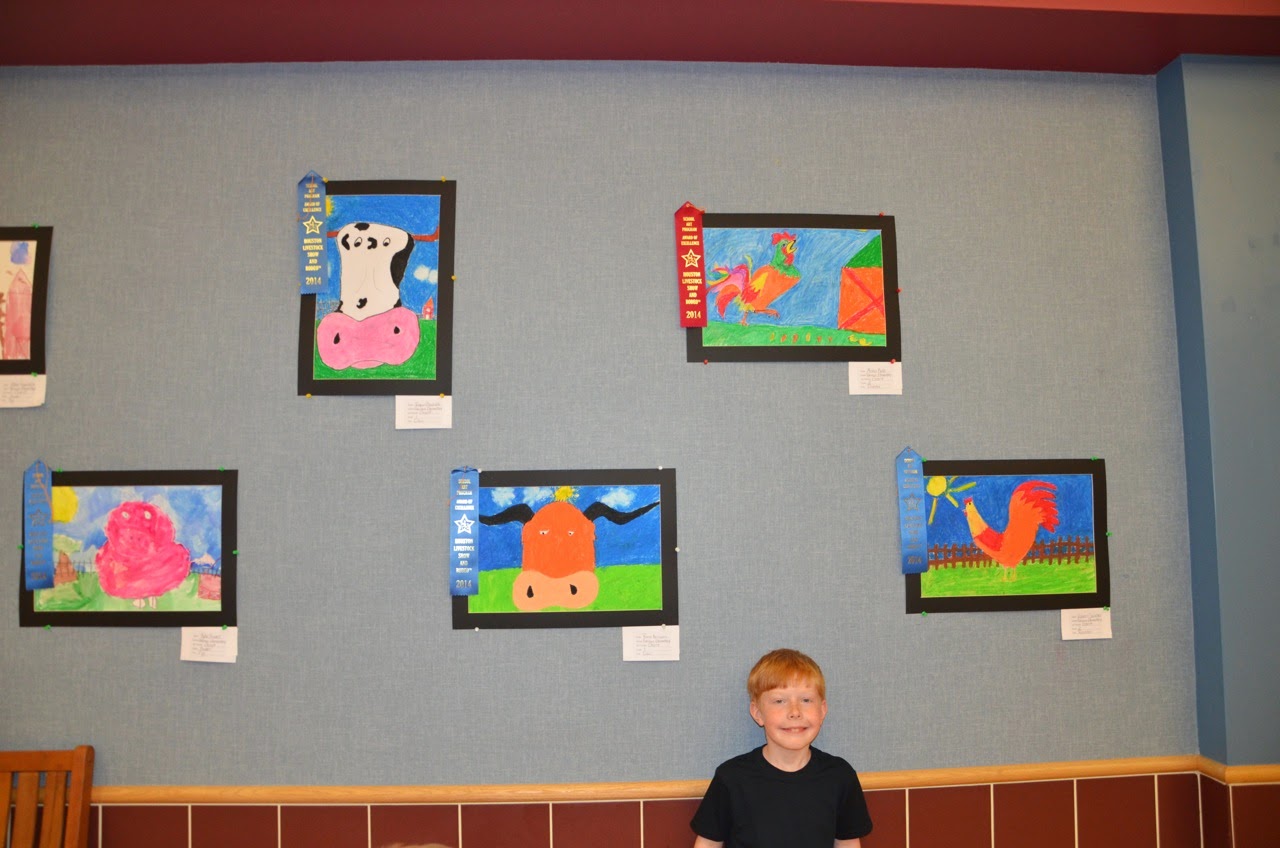 Misha's rooster picture was chosen to be displayed at the rodeo exhibit at the University of Houston Clear Lake. Awesome! 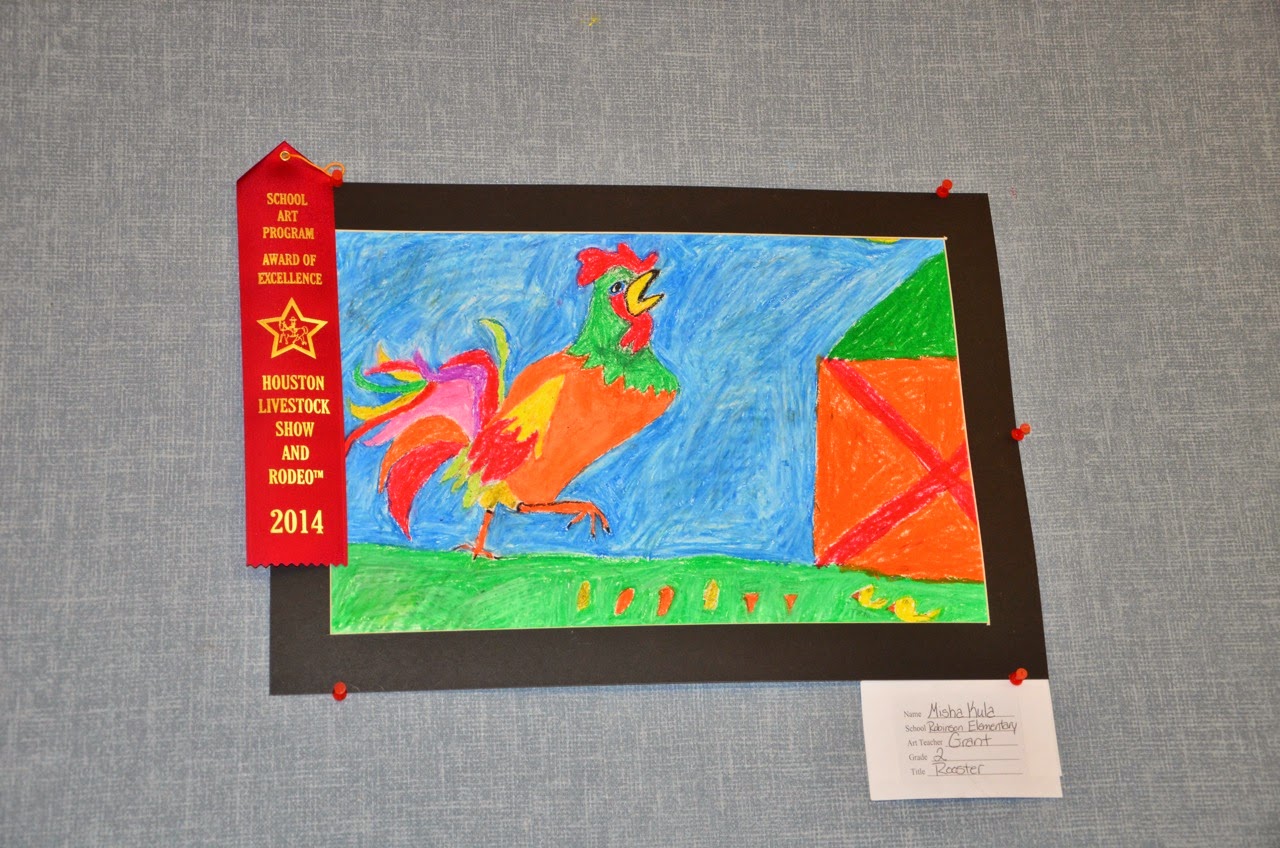 Last week, Misha's school put on an International Day, in which kids could choose a country, create a photo display, show off items, and dress up in traditional clothes. Some children chose their country of origin (Houston has so much diversity), but we chose, of course, Kyrgyzstan. Misha spent the evening running around in a kalpak, a Kyrgyz robe, and tapachki (slippers), looking, as Bud said, like a little wizard with his cloak flowing out behind him. He got to show his classmates the Cyrillic alphabet, and he even got to grace the stage to show off his outfit in the fashion show. 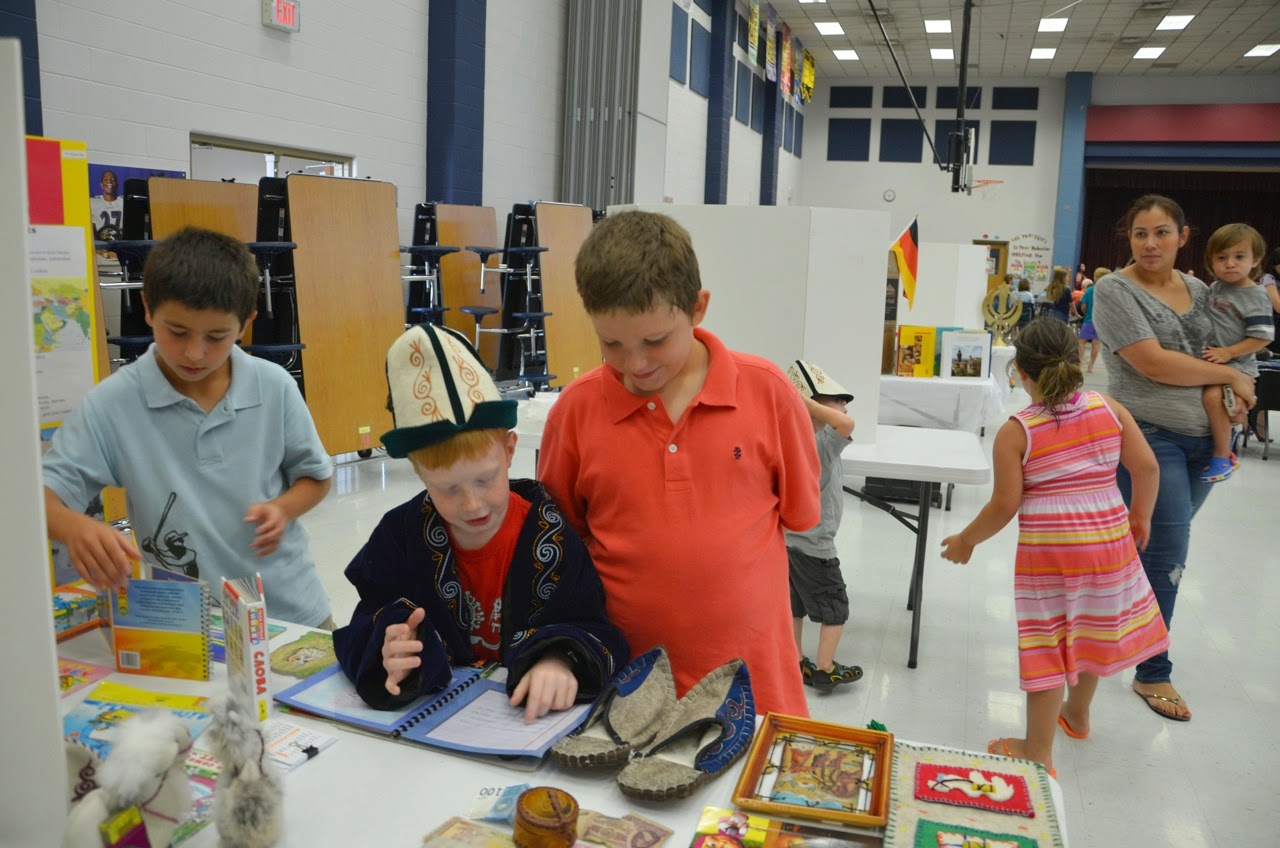 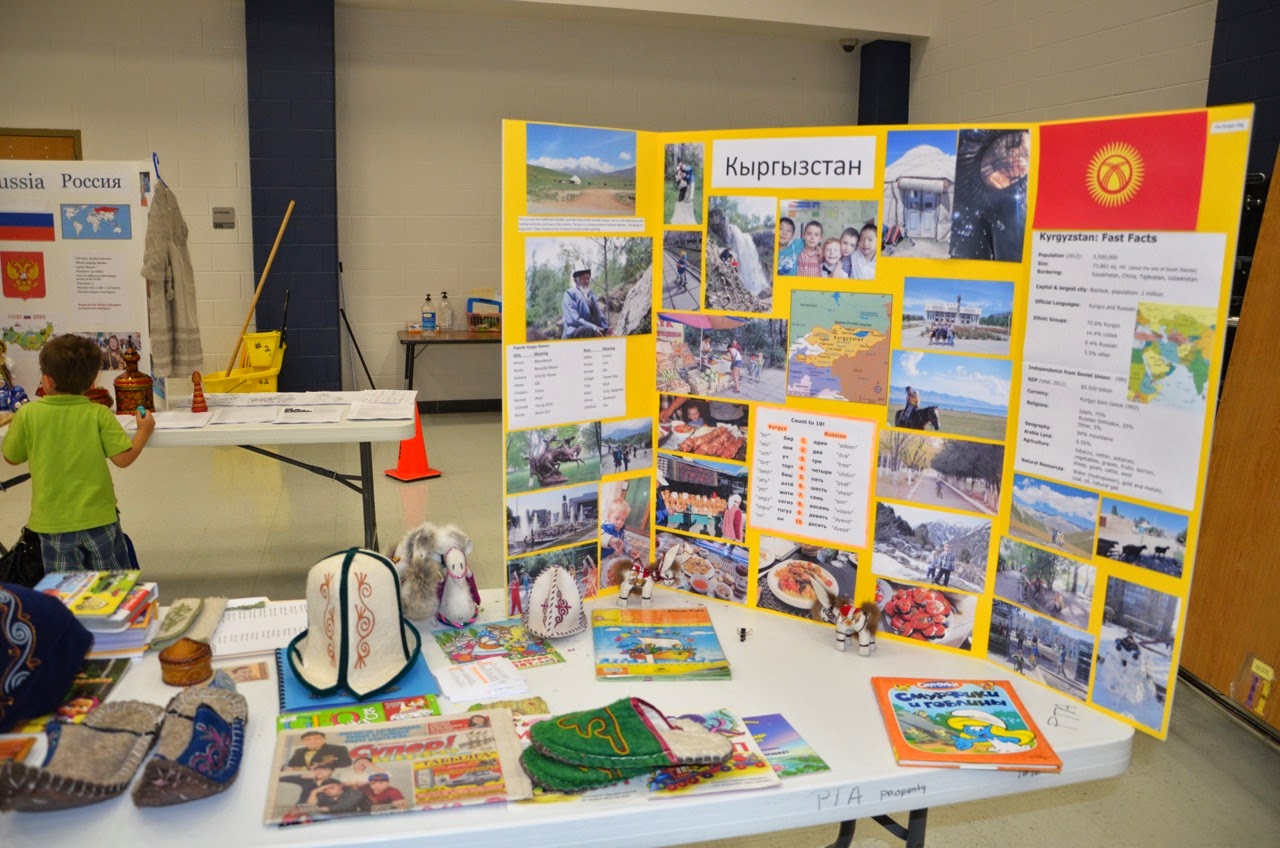 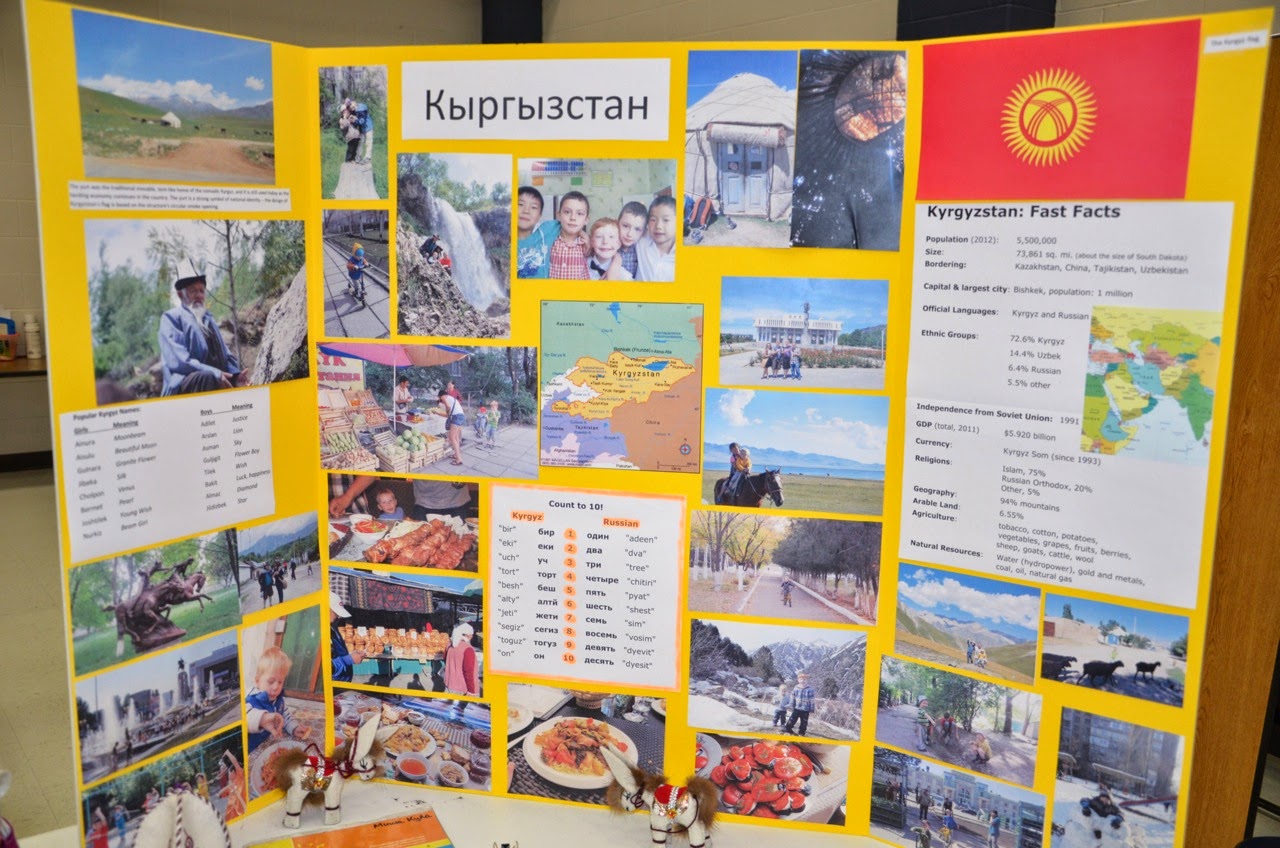 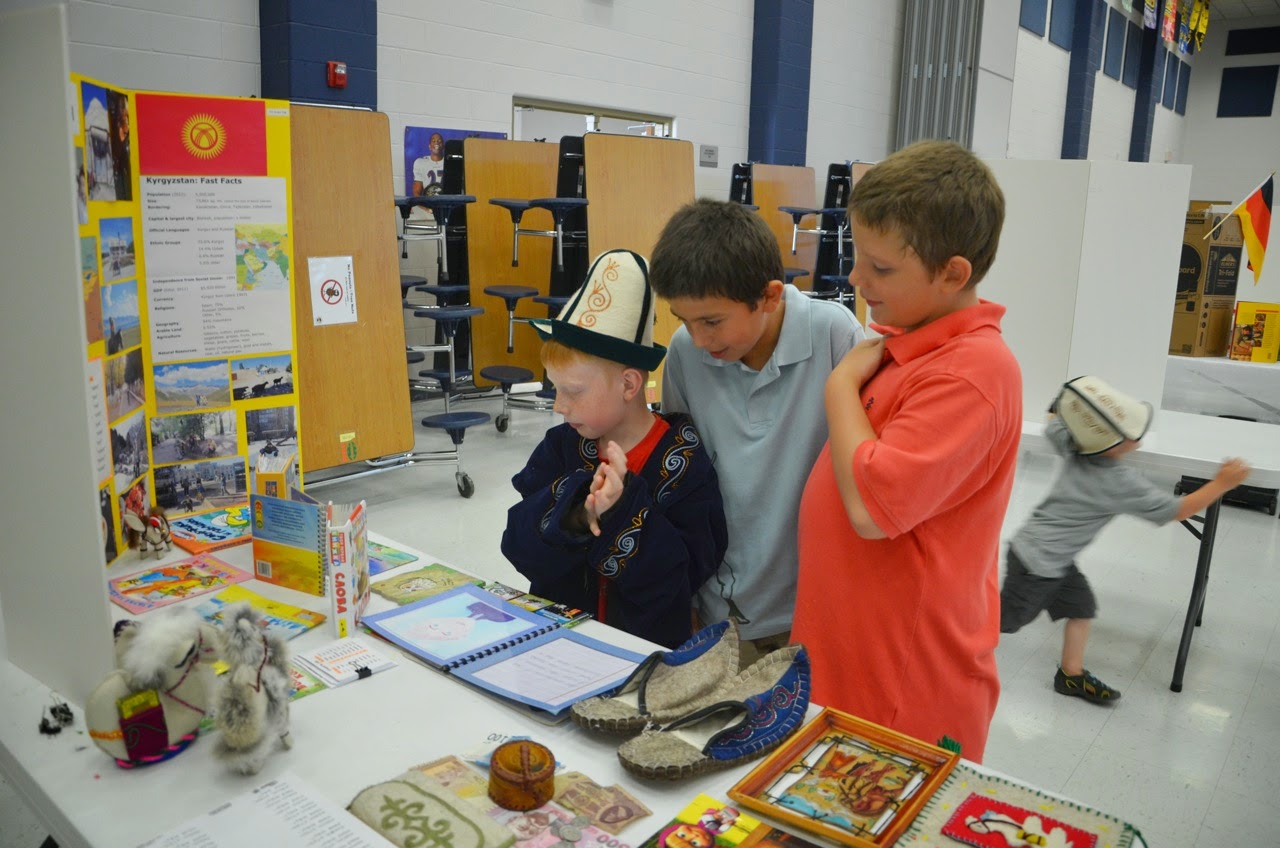 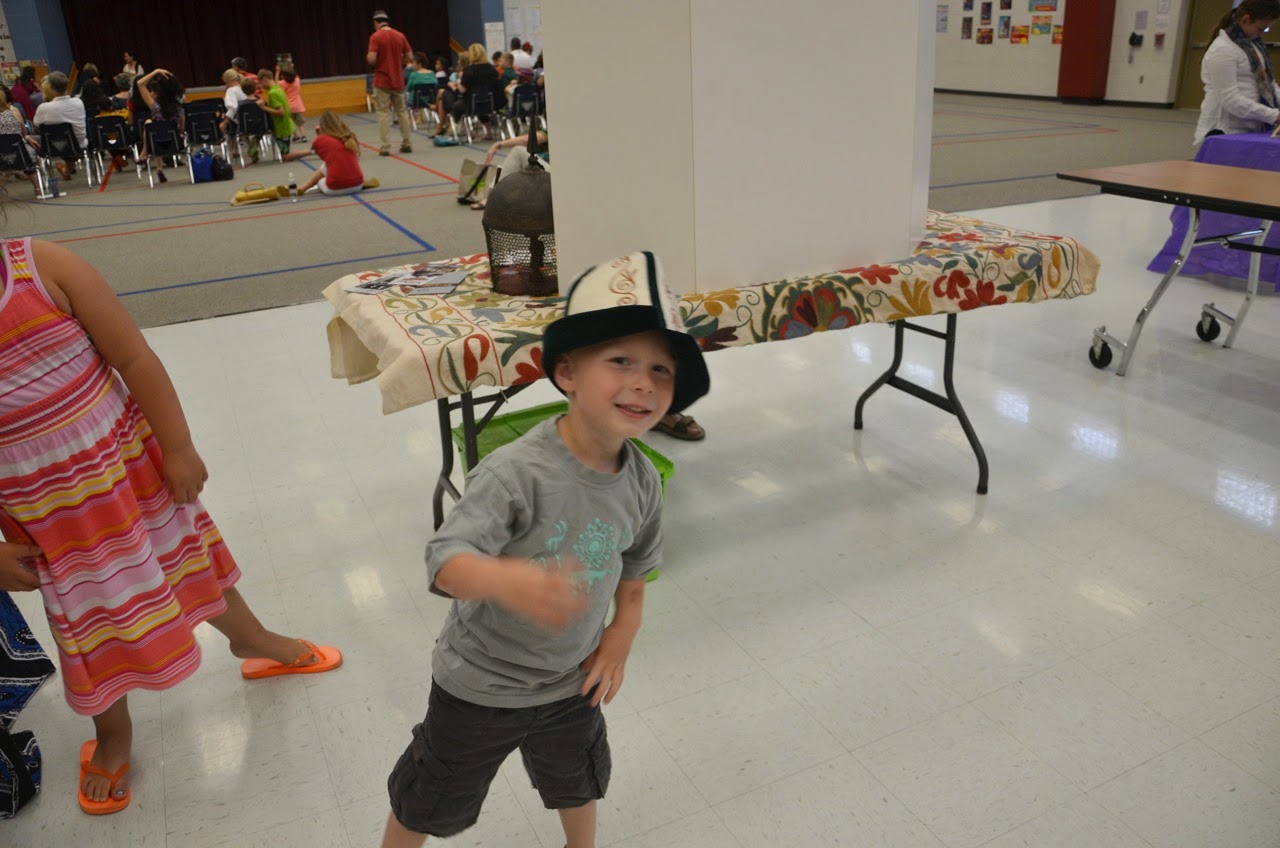 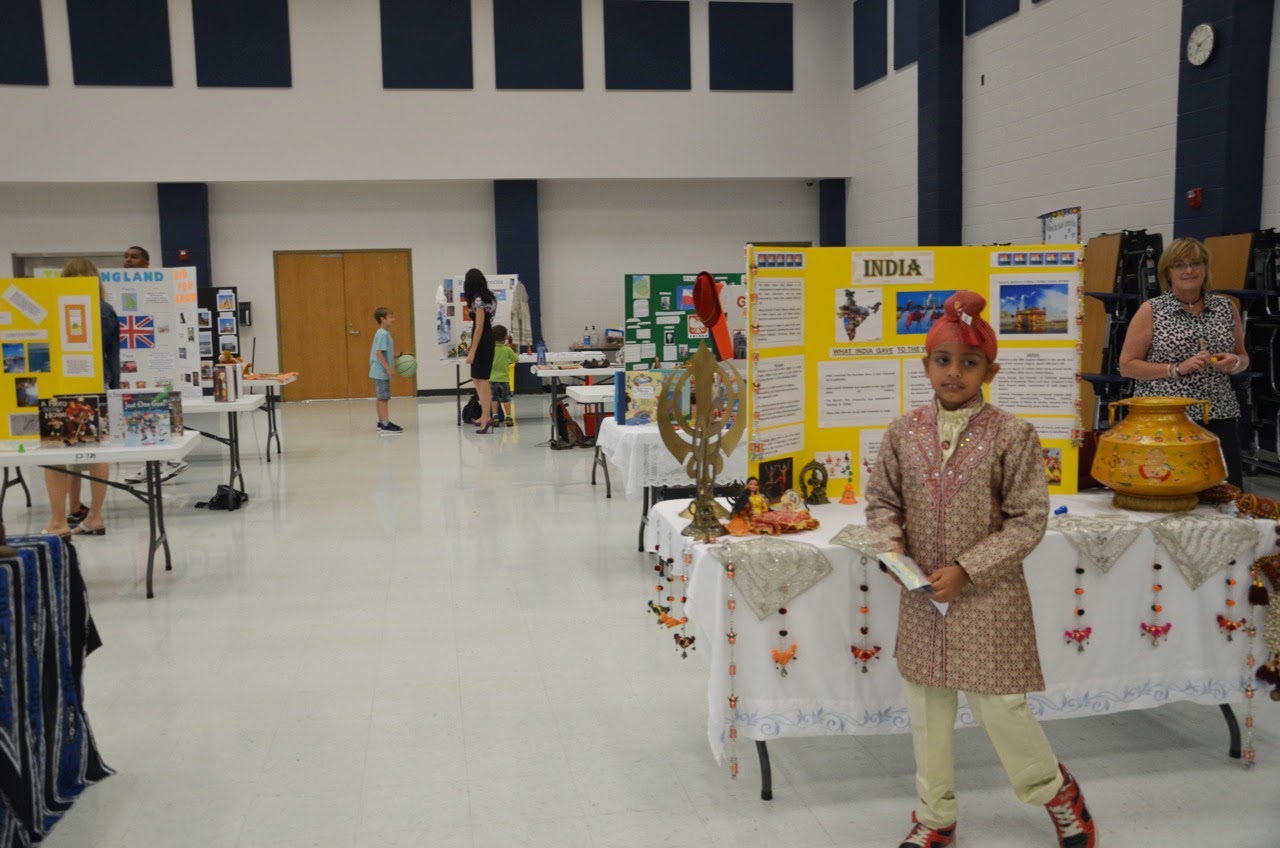 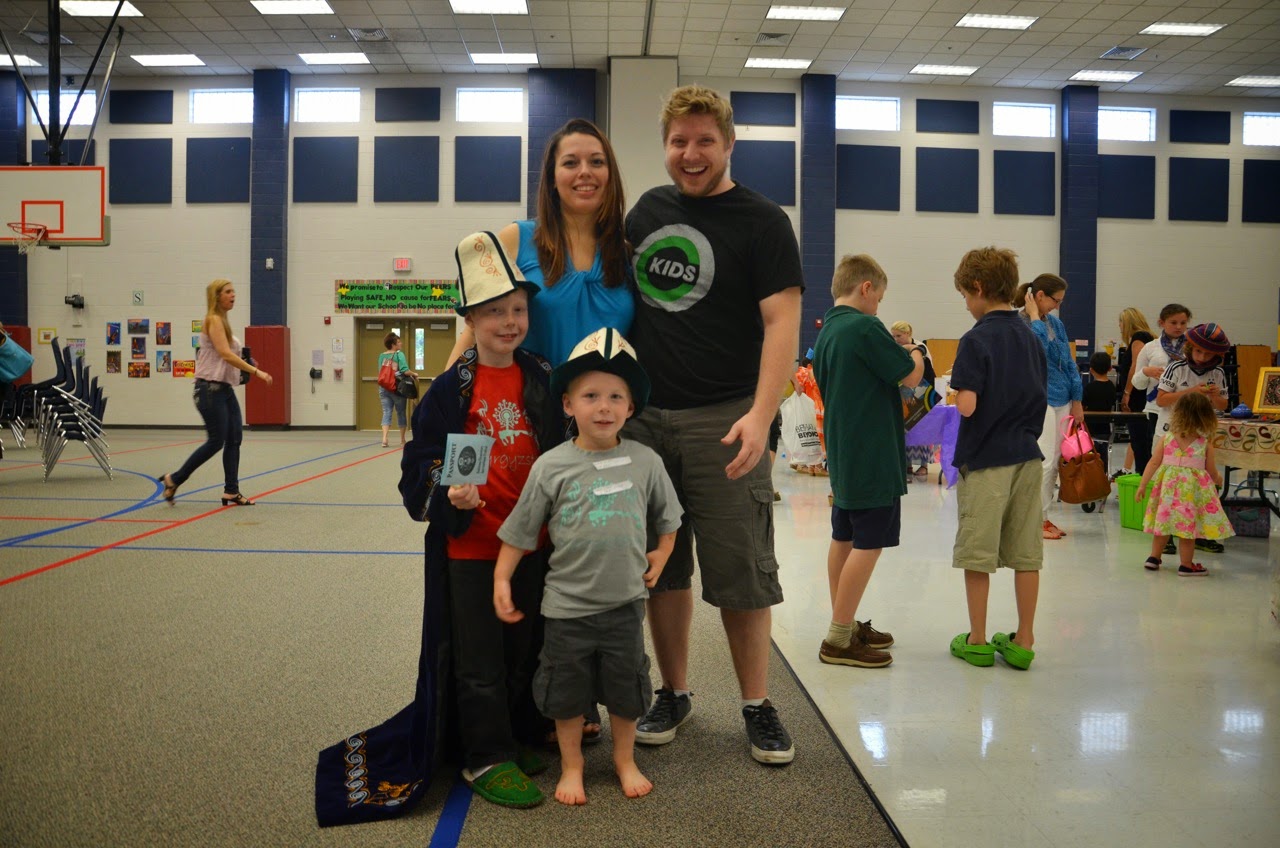 With Misha and Sebby around, Josh and I are constantly amused and impressed with their words.

I love how "McDonalds" is not a household word for us. Going there is a rare occasion, so that when they do go, they are happy to get chicken nuggets, but it doesn't become a daily request. The last time they went with Ashley's mom, Sebby was trying to remember the name of the restaurant. "That place she took us - chicken nugget tunnels?" he asked.

The word "long" can refer both to time and to physical distance, so when Sebby was taking a bath and experimenting with how many seconds he could hold his breath, he asked me, "How long can you hold your breath?" He held up his hands with some space in between them, saying, "This long?"

Sebby's birthday is coming up fast. Trying to describe his age now, he said, "I'm like half and a four."

During picture day at preschool, Sebby received so many compliments on his cuteness that it went to his head. He came out of the brief photo shoot at the end of the day and told Daddy, "I couldn't even get any cuter!" - repeating the words of the photographer.

Getting Sebby (and Misha) to eat veggies is hard at times, but luckily there are some veggies that he likes. About broccoli, he said, "I ate one and got yummied up!"

Driving home, Sebby suddenly asked, "If I trap a ghost in my seatbelt, can it get out?"
I said, "Well, I think a ghost could probably get out of a seatbelt."
"No, I mean MY seatbelt!" Sebby said, because obviously child-carseat-belts are the super good kind.

Another day while driving, Sebby made an exciting discovery. "Look mom! I can make 3 three ways! The normal way (holding up the three middle fingers), this way (thumb and first two), and this way! (the I-love-you position)" Then he got even more excited as he discovered yet another way!

Most mornings, the kids wake up singing "Do you wanna build a snowman?" or "Let it go" at the top of their lungs, but today, Sebby has mastered a new song. It took him many days and many tries, but now he's almost got it right, except for the banana part. "Sebby-bo-bebby, fo-fanna-fanna fo-febby, mi-mi mo-memmy, Sebby!" This song is endlessly amusing for both boys, and they go through every proper and common noun they know.

Misha is as involved in reading, writing, and creating projects as ever. While diligently writing something, he asked me how to spell "grow." I spelled it and he wrote it. His next question was, "Ok, how do you spell 'nup'?"
"You mean 'up'?" I said.
"No, 'nup,' like grow-nup," said Misha.

Reading the outside of a game they were about to say, Misha announced to Sebby, "Well, Seb, it says ages five and up, but you're almost five, so I think you can handle it."

After a cause-and-effect themed day in science class, Misha put that knowledge to work in the bathtub that night with Sebby. "The cause is that you're standing on the bathtub. The effect is that you fall," he explained.

At a dodge-ball event with Bud and Ashley during which pop music played loudly the whole time, Misha asked me, "Mom, what is yumka?"
"Yumka? What do you mean?" I said.
"Just yumka. What is it?"
"I don't know what you're talking about."
"In the song!" Misha persisted. "YMCA. Yumka."

Every day when I walk Misha to the bus, before he disappears inside the doors, he asks me, "Can you wave?" And so I do until the bus disappears behind the trees. (Sometimes other kids wave back at me too.)

While painting with our super-fun paint chalk recently, I drew the world, and Misha started contemplating. "Isn't it amazing that we're alive? and that all of this is here?" ("No," said Sebby bluntly.) "It is!" I said. "And something could happen and we don't even think about it!" said Misha as we walked inside. We've been reading about lost cities, volcanoes, earthquakes, not to mention the fact that the sun will one day (in the very distant future) burn out. Both boys ask me quite frequently about the sun burning out.

When Misha came home with an awesome report card last quarter, he said, "Mr. Vaughn says you must be raising me right."

Outside of school, here are a few other activities we've been up to. First, a trip back to the bayou with Josh's cousin David and his wife Misti. We were all elated to see a real, live alligator hanging out in the swamp under the bridge we walked over. 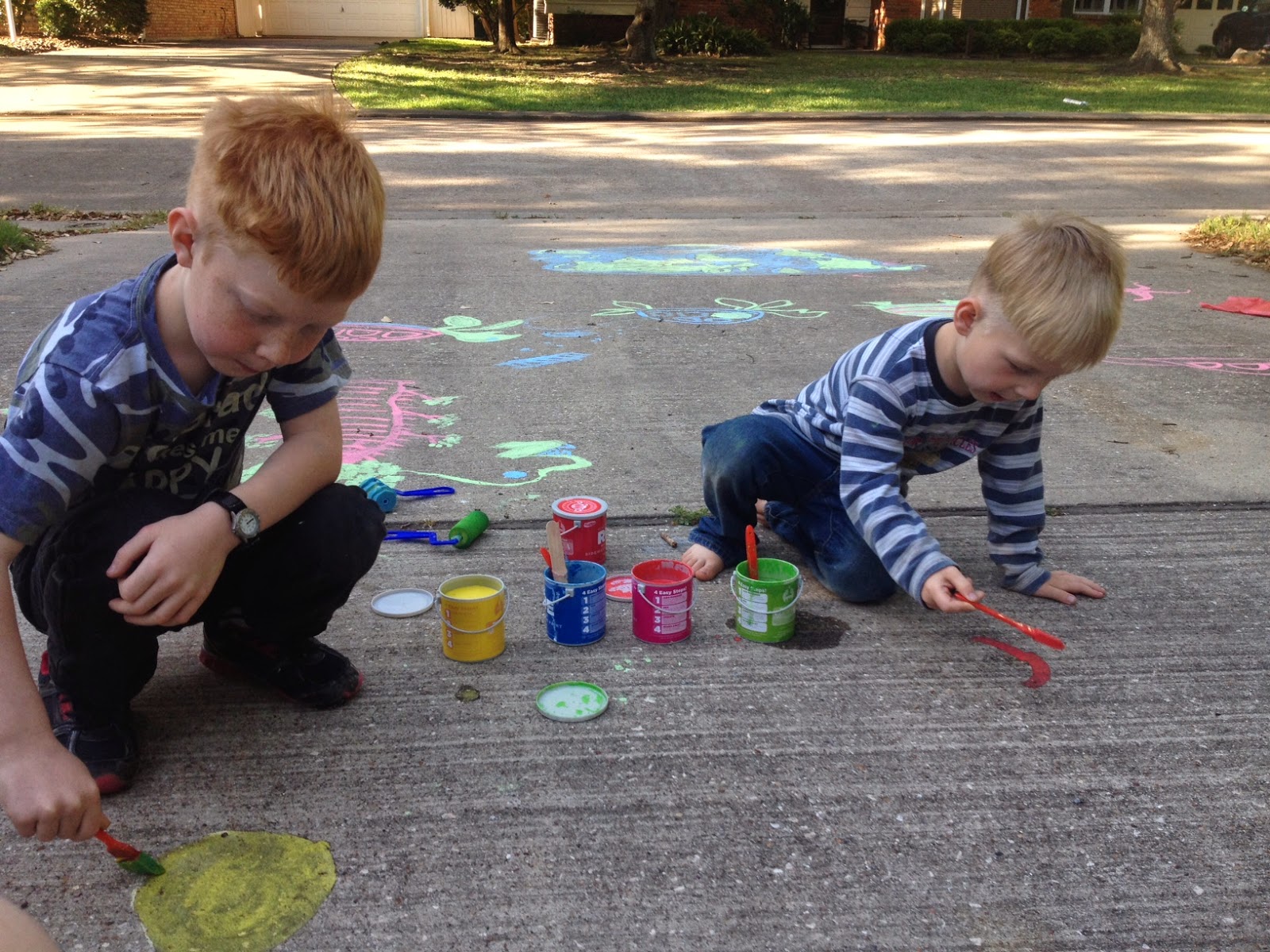 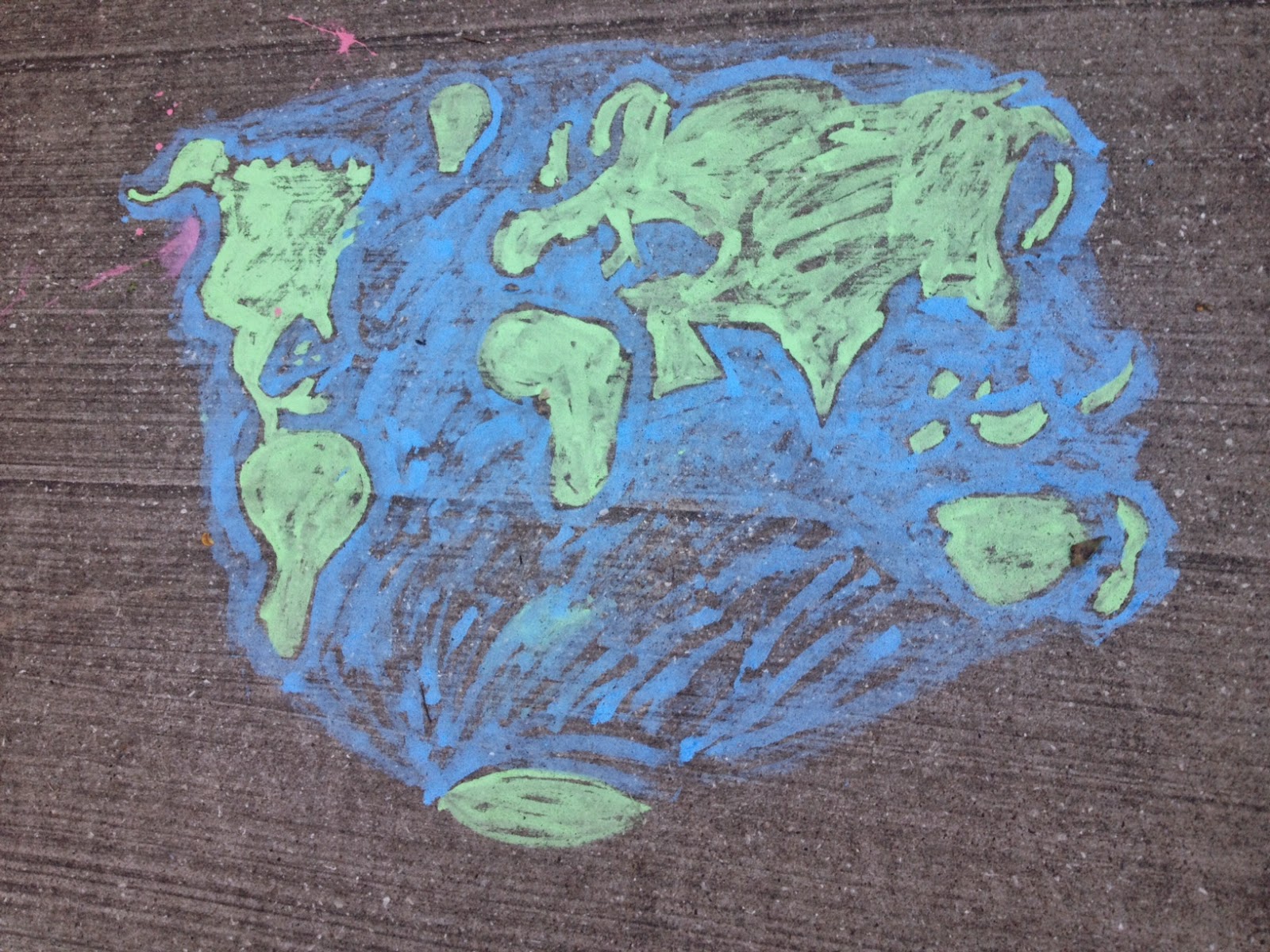 Another fun project has been making our feather quills. Grandpa sent several huge turkey vulture feathers and one hoot owl feather for Misha's birthday, and we watched a youtube video on how to cut them for writing. It was not too difficult, and soon both boys were so excited to be writing by dipping their quills in ink. Misha wrote a huge letter to Grandpa. I remarked that he seemed to write more with a quill than with a regular pen! Sebby loved it too, writing his name and drawing a picture. 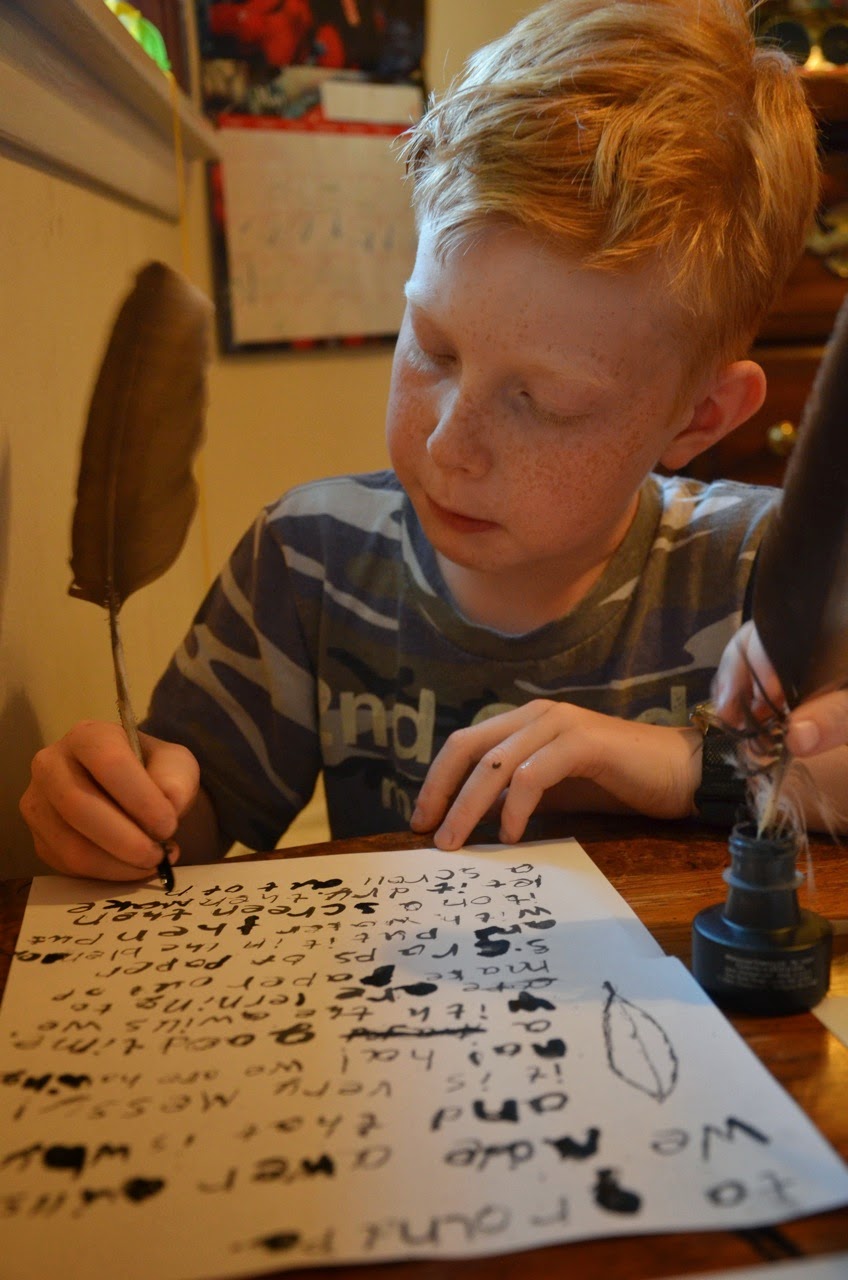 We also attended a spring arts fest last weekend, where we admired chalk artists (I've got to buy some soft pastels and try it out!), the park, the spinning wheel (another enticing-looking hobby!), and the geodes. Each boy got a egg-sized geode that splits in half to reveal its sparkling center. 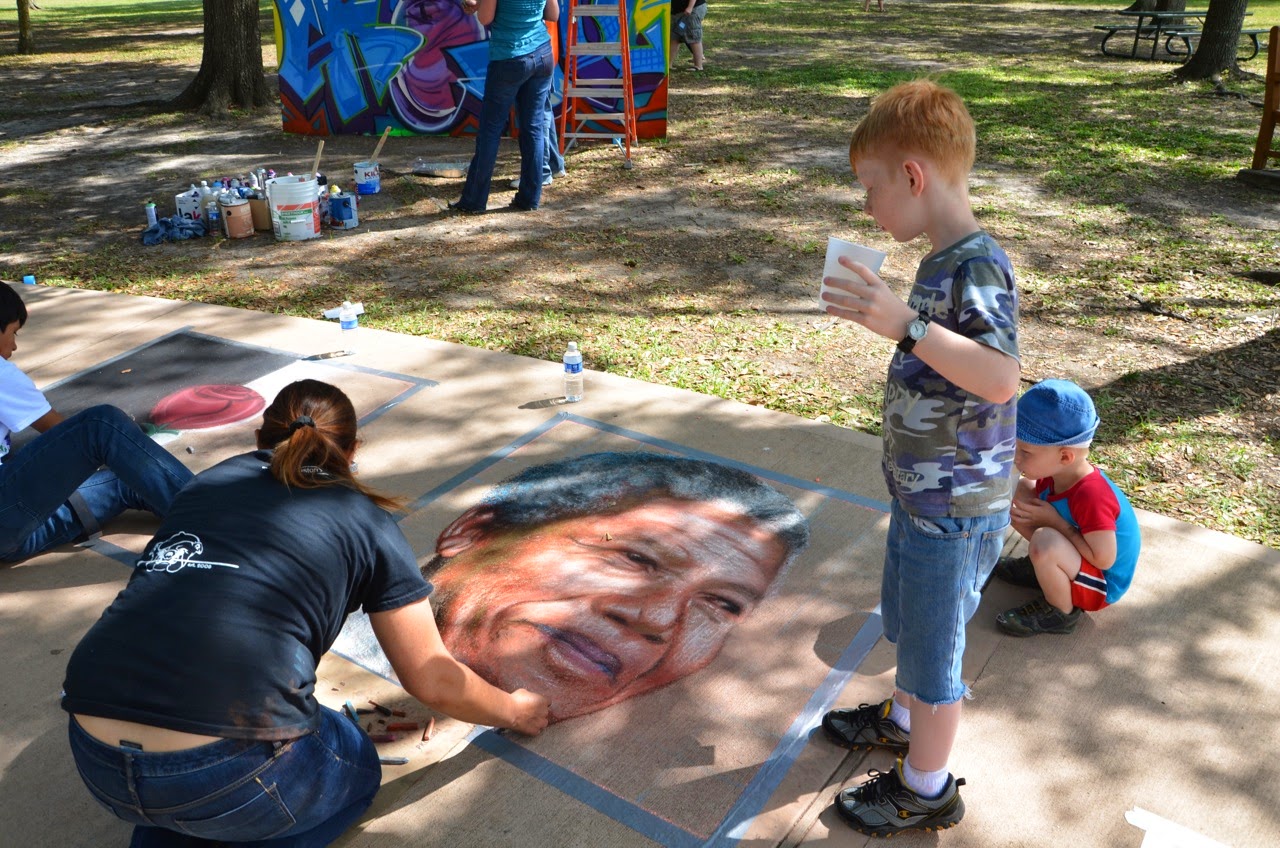 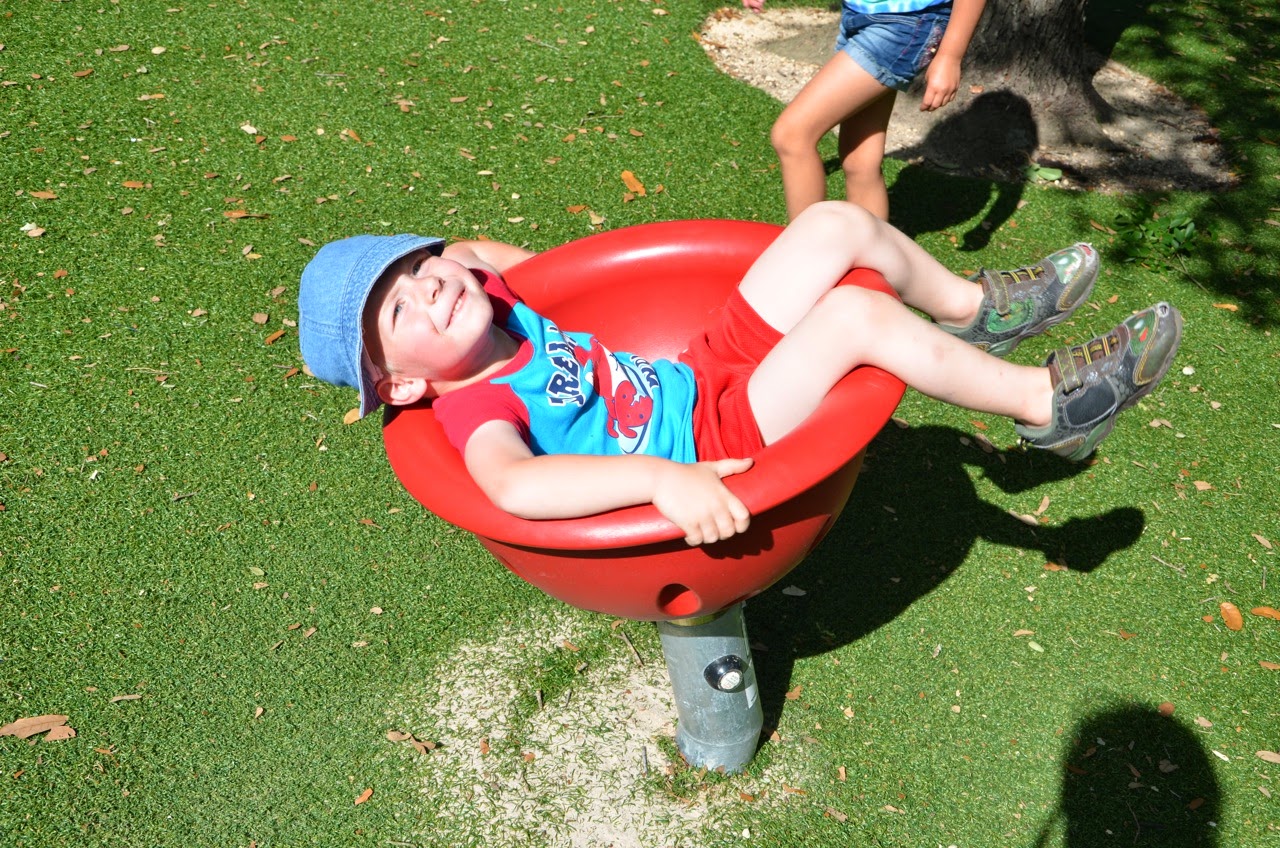 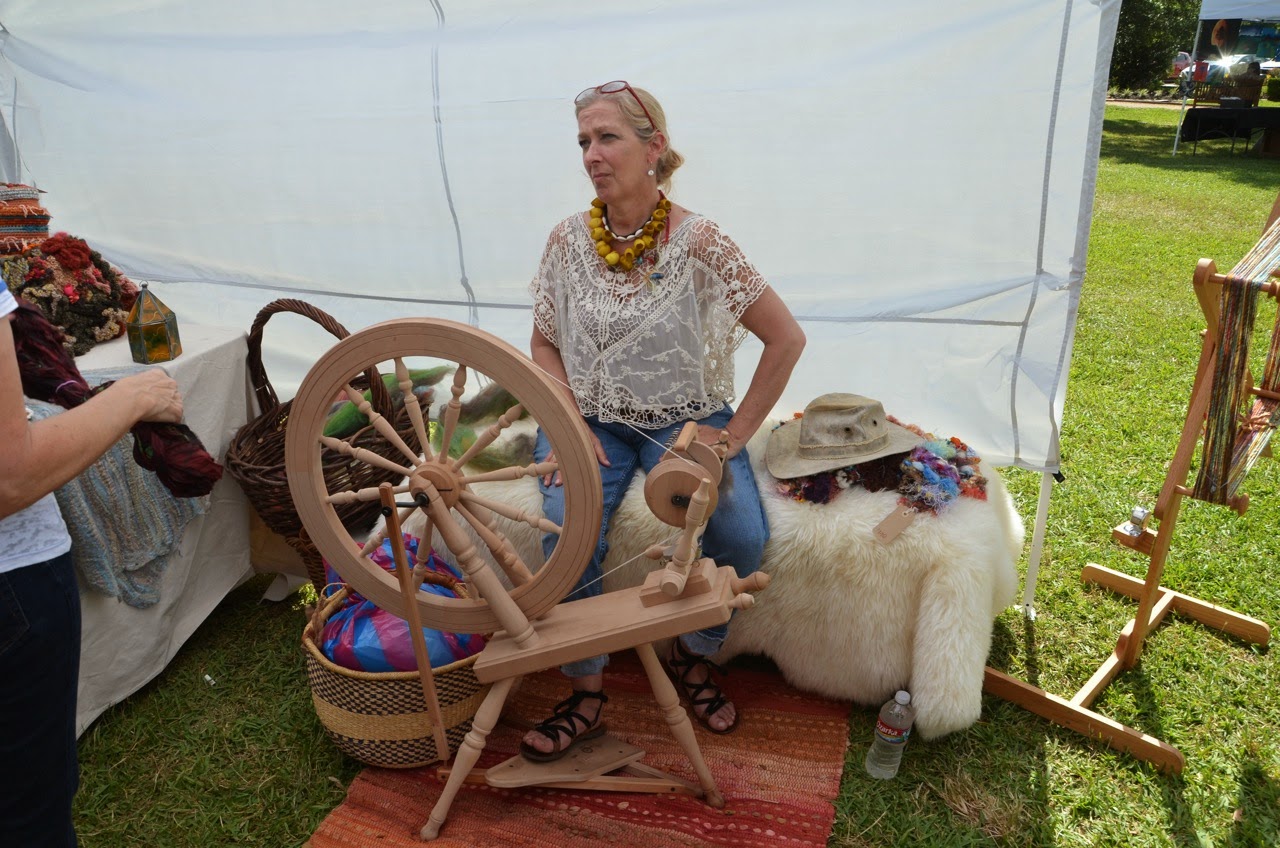 On a Saturday morning before 8 o'clock... why not have a sword fight outdoors? 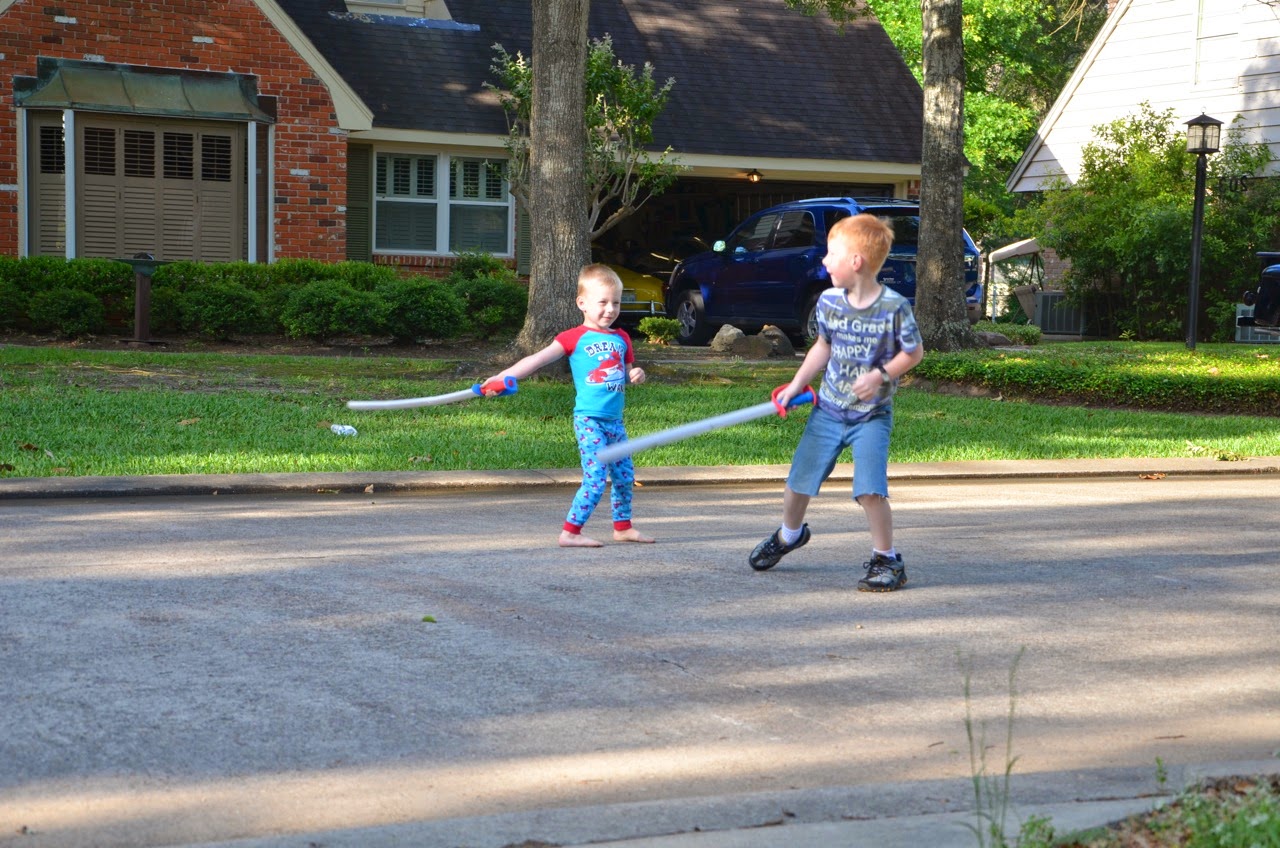 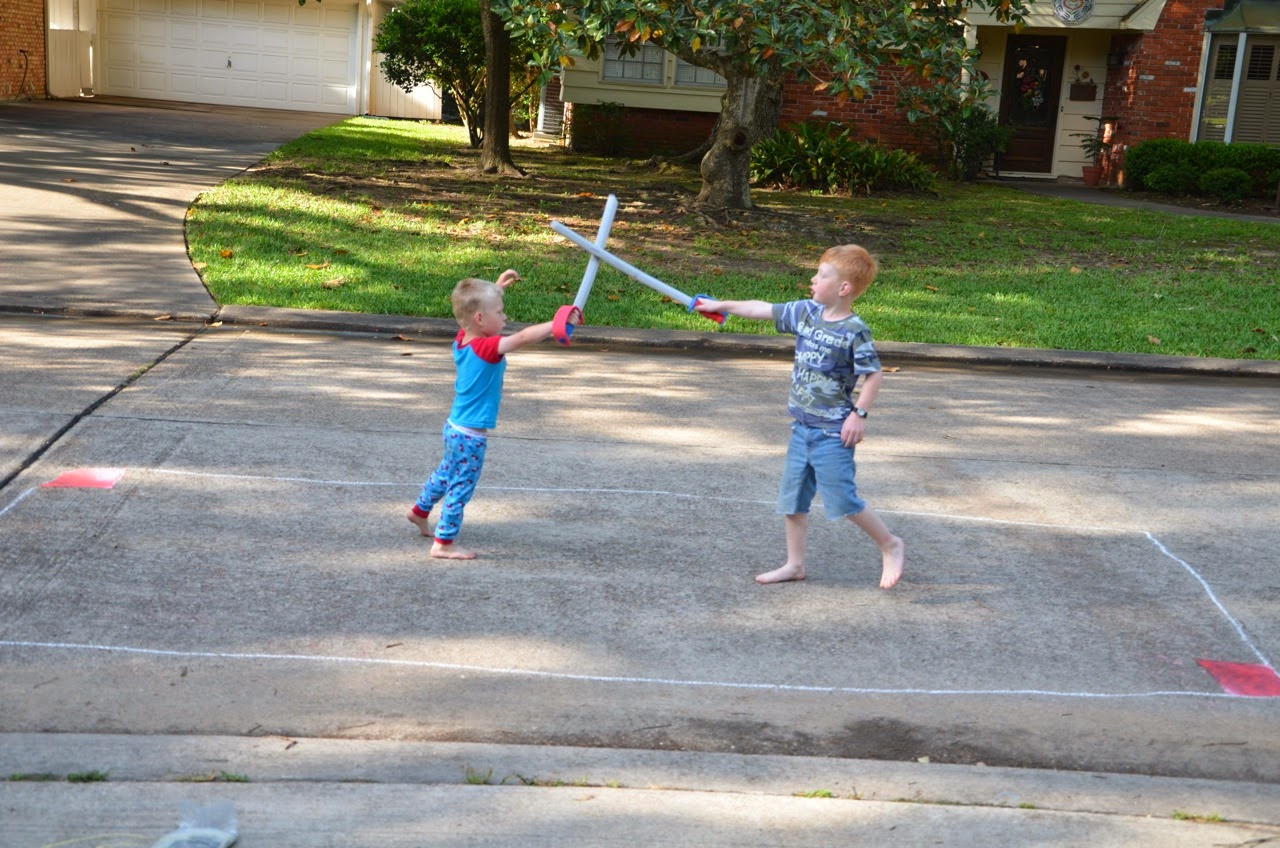 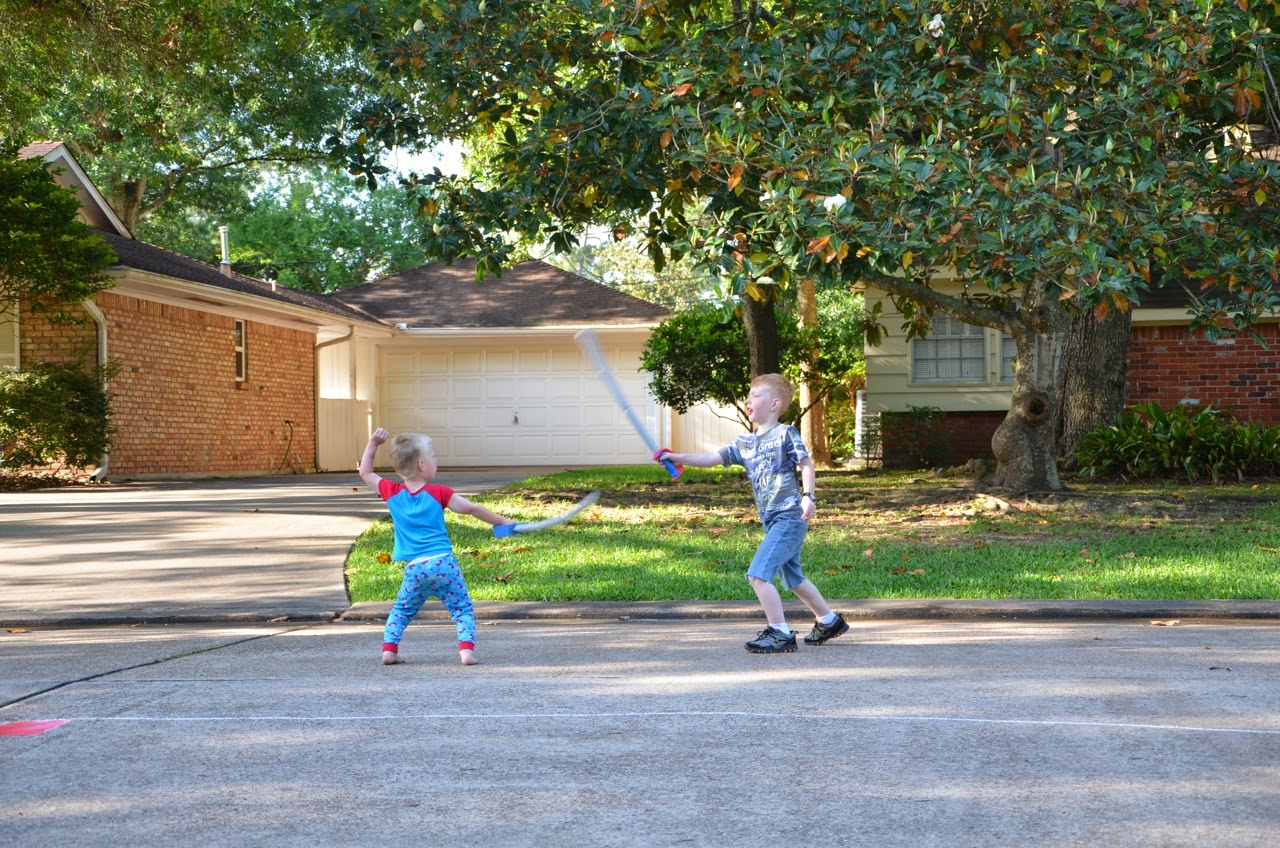 Our garden project is going well! It's certainly on the small side (very small), but it has made the kids excited about growing (and eating) vegetables, so in my book, that's a success. In March, we first planted a few things. A few weeks later, we added a few more, to bring our collection to a few pumpkins, zucchini, cucumbers, watermelon, carrots, sunflowers - and the green beans growing up our little huts. With one setback of foster boxers romping through our garden ripping up zucchinis, the plants have been growing steadily. Everyone was bursting with excitement when the beans flowered and produced tiny baby beans, and just a few days ago, we got to enjoy the "fruits" of our efforts and eat our full-grown beans! True, it was only a handful for each of the boys, but they ate them and loved them, so proud that they were OUR beans and not from a store. It made me happy the next day when Sebby came down for breakfast and thought about what he wanted to eat. After a bit, he said, "Can I have green beans?" (There were only two left, which he ate, along with a bowl of mashed potatoes.)

The beans got most of the attention, but the pumpkins are also thriving! We are hopeful to have our own pumpkin by Halloween. We'll see. We also have a few zucchini, cucumber and watermelon plants that are slowly but surely getting bigger. 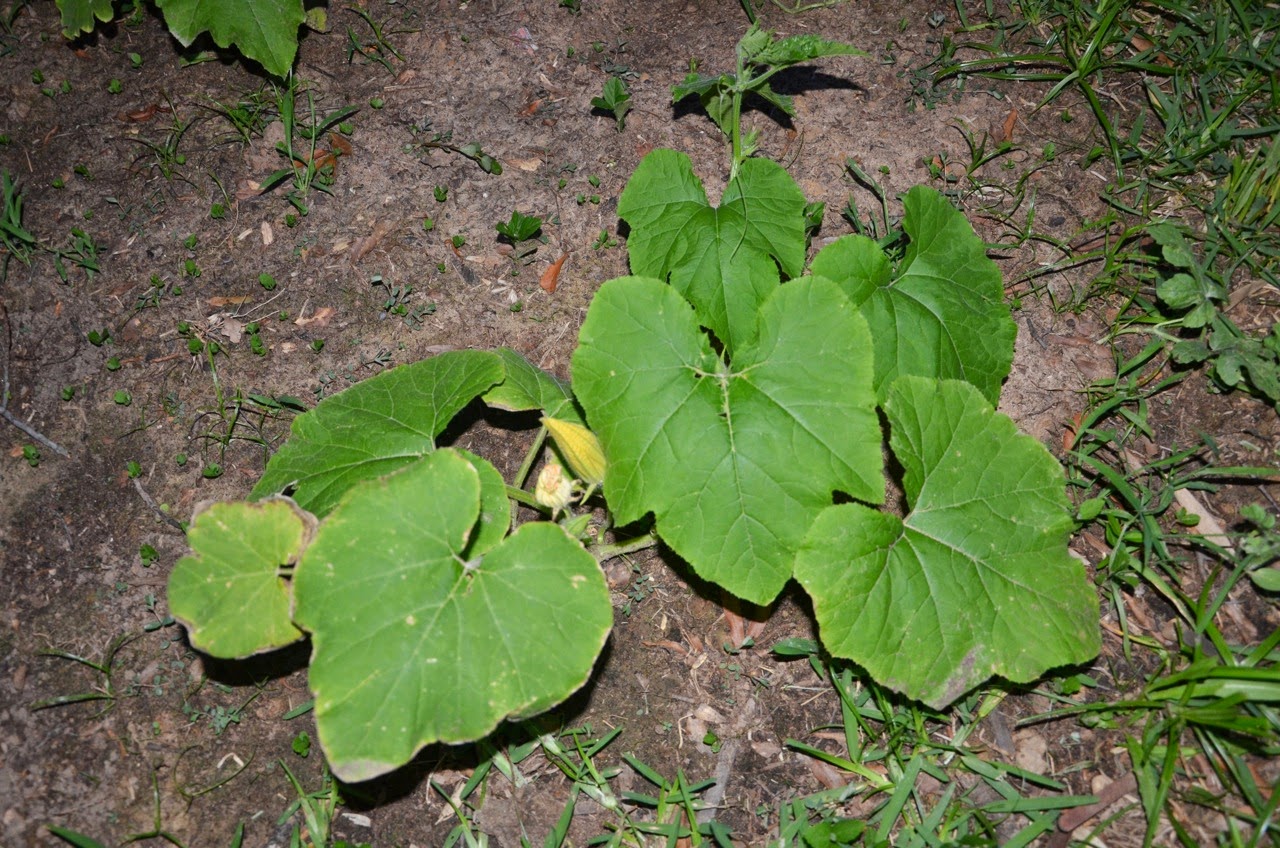