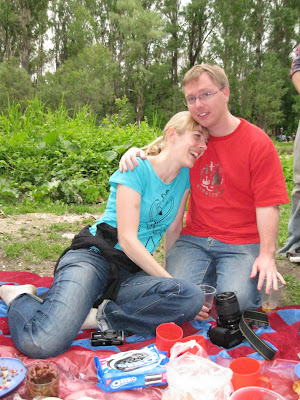 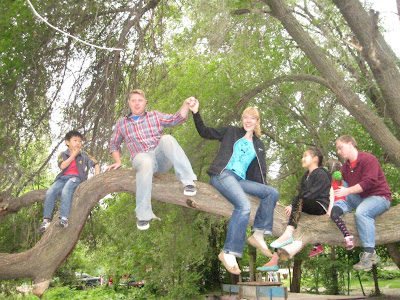 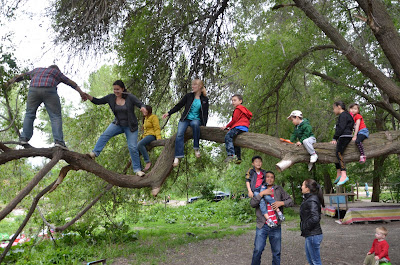 Then it was off to the mountains. We were planning on staying for just a short while, but the chilly weather was invigorating and the mountains were so beautiful that we ended up walking around for quite some time. The children ran up ahead to climb on rocks and explore the bridge. By the time we wandered back again, it was dark, and we were happy to discover that the little yurts were still open for tea and kymyz. So we all sat around the large table, filling it up perfectly, and drank tea. We ordered a bottle of kymyz as well, of which Josh promptly drank three cups. This prompted Bud to do the same, even though he couldn't stand the taste. He choked down three cups and then went for a fourth! We finally headed back to Bishkek around 10 p.m. where I gave everyone hugs goodbye and promised to say goodbye again the next day, the last.


Sunday was dedicated to preparing our ten suitcases. Yes, ten, since every passenger gets two, and we had five fliers: me, Sebby, Misha, Bud and Ashley. Since we had almost everything ready by early afternoon, we accepted Turat and Anara's sweet invitation to go out for shashlik. We splurged on lamb, duck, chicken, and liver.

Then it was back home to wrap up final details, and before such a big flight, there were a lot of those. In the evening, friends kept dropping by, more and more, until our house was filled with thoughtful presents from people, friends telling us how much they'd miss us, and children. Many children. The last photos:


Eventually, the evening quieted down, everyone left, and we were able to have some time to relax. A few hours later, we were headed to the airport. All too quickly, we were hugging Josh goodbye (only for two months) and starting our long journey by checking a massive amount of luggage.

The flights were long but they went relatively smoothly, first six hours to Istanbul, then 13 hours to Houston. The kids cheered in excitement during the first take-off and were completely delighted with their pull-out trays and the provided slippers and sleep shields, but I didn't notice because I had already fallen asleep in exhaustion. How nice it was to travel with Bud and Ashley! About four hours into the second flight, after all the magic of airplanes had worn off, Sebby started begging, "I want to get out now!" Luckily he fell asleep for several hours at that point, and soon enough we were stepping out into the bustling American city of Houston.

Thank you, Bud and Ashley, for sharing in our Kyrgyzstan experience and for all your help with the kids.

Thank you to all our friends in Bishkek for your generosity and help, your kind words, and your thoughtful actions and gifts. Kyrgyzstan has given me so many wonderful memories; I won't forget.
Posted by Tammy Kula at 1:00 AM No comments: