Have a Holy Moly Christmas (as Misha says) 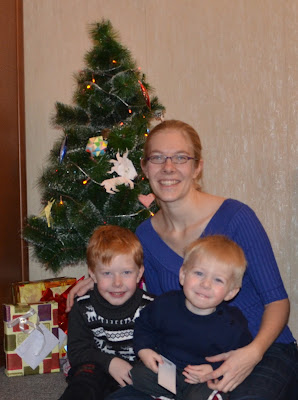 New Year's Eve arrived at last, and Misha reveled in the idea that Dyed Moroz was coming that very night. We took some more pictures in front of the tree, 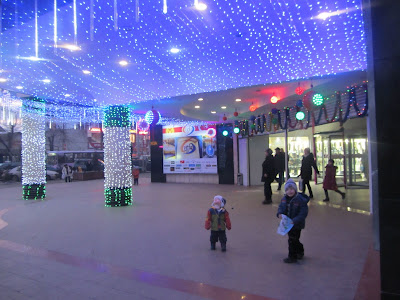 admired the decorations at the Vefa Center, 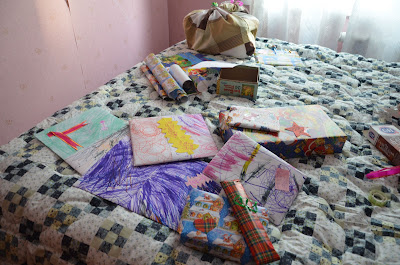 and finished last-minute gift-wrapping. Since wrapping paper is only found in certain places and it's a bit expensive, we only bought a small amount. For many of the presents, I recycled Sebby's beautiful and numerous drawings to use as Christmas wrapping. It worked extremely well, and Sebby was proud to have his work displayed in such a manner, never forgetting to point out that "Sebby do it!" 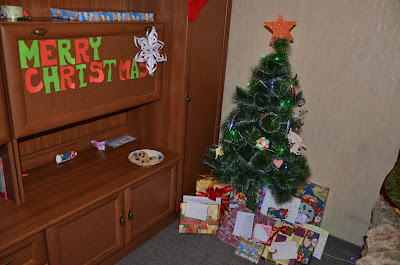 We left the cookies by the tree and the kids went to bed with bottled-up excitement  - and visions of sugarplums dancing in their heads. 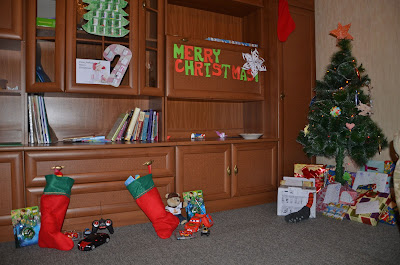 At some point during the night, the scene in our living room changed to this.
Misha was the first one up at 8 a.m. He came bounding into our dark room, chattering in a voice that couldn't quite be contained by his attempted whisper, "Mom, Santa CAME! There are MORE presents! And one of them is wrapped in Calvin and Hobbes paper ! Wait, let me go see if the cookies are gone!" Off he dashed, quickly returning to announce, "They're GONE! He ate them ALL! And the stockings are full! And they're on the GROUND, Mom! Come see!"
Having stayed up far too late, Josh and I were exhausted, but I dragged myself out of bed to keep Misha from opening everything himself. He was ready to rip right into the Calvin-and-Hobbes-covered package, knowing full well that inside was the Hobbes I made for him that he had decided he really wanted a few weeks before Christmas. When he saw the tail that I had purposely left poking out from the package, he said, "Look! It looks JUST like him!" He also started test-driving the remote-control car that Santa left by his stocking. Appreciating the quick steering response of the car, he said reverently, "It must be made with magic!"
He then began peering into his stocking. To slow him down a bit, I told him we should wait for Daddy, and that he should go wake up Sebby. On a normal day, Sebby wakes up so slowly that I usually have him completely dressed and am putting on his coat and boots by the time he opens his eyes. But when Misha shook him awake exclaiming, "Sebby, wake up! Santa came!" that little boy hopped right out of bed and went running so quickly toward the living room that he crashed right into my legs and fell down. Without stopping to cry, he jumped up and charged into the living room asking, "Where's Santa? Where's Santa?" Misha had to explain that he wasn't there - but the stockings were. 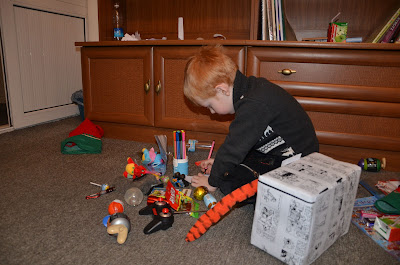 Josh staggered out to join us as the boys dumped out their stockings to find toys and candy. Misha got his laser light and Sebby got a mini flashlight. Sebby downed at least three chocolate bars before we managed to stash the remaining candy up high for later.
Then we moved on to the presents. Sebby loved ripping open the packages, no matter whose they were. The only thing that was able to halt his relentless unwrapping mission was a Santa coloring book. After opening it, he ran out of the room, returned with his box of crayons, laid down on the floor, and started coloring.
On to the photos. Here are a few highlights:


The Story of Hobbes
Since about age four, Misha has enjoyed having Calvin and Hobbes comics read to him from time to time before bed. We brought several of the books with us to Kyrgyzstan, so we have been reading a lot of Calvin's adventures lately. A few weeks before Christmas, Misha told me that he really wanted his very own Hobbes this year. When I told him that Hobbes just isn't sold in stores, he was undeterred, and knowing I couldn't let him down, I decided to make one. Meanwhile, Misha spent his time preparing for Hobbes' arrival. He made origami clubhouse hats for himself and for Hobbes, as well as treasure maps and telescopes. He even drew a "Misha and Hobbes" cartoon. In his room, he taped up a little sign for Hobbes that read, "Come heer on Day 25." (He was originally hoping that Hobbes would make it by Christmas so he could participate in the New Year festivities with the family, but I didn't get around to it in time.)
I made a trip to Madina Bazaar, a large market known for having everything from fabric and sewing machines to insulation and building materials. There I found an amazing array of fabric and I easily found soft, strong, non-fraying material for making a Hobbes. I also got a half kilo of cotton stuffing, which, as it turns out, is an awful lot. During Misha's last morning at school before the break, I spent four hours cutting, sewing and stuffing, just barely finishing in time to go pick up the boys. 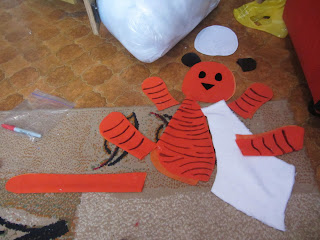 Here he is all cut out and ready to be sewed. I drew the stripes on with permanent marker. 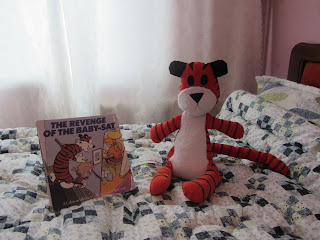 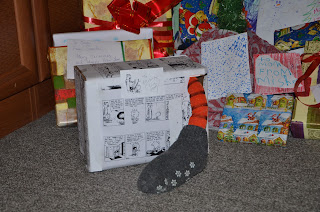 I wrapped him in Calvin and Hobbes paper, printed from our computer, with his tail peeking out. (Josh added the sock.) 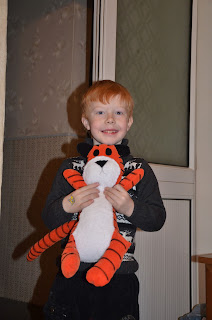 Happily, Misha thought Hobbes was just right. He only requested one modification - claws on his paws drawn with marker. Check!
Of course, fulfilling the prophecy of my parents and sister, Sebby wanted one too. So the next day, to keep the peace, I made a second Hobbes. This one went a little faster, since I had two helpers to turn limbs and stuff them. As I worked, Sebby kept popping over to see my progress, saying happily, "Sebby's Hobbes! Not Misha's." 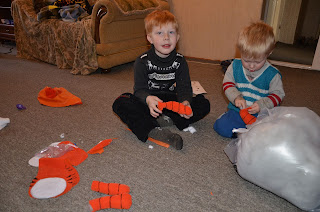 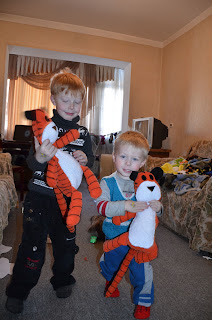 When he was done, Sebby clutched his Hobbes in a tight hug, and now he carries him around everywhere. 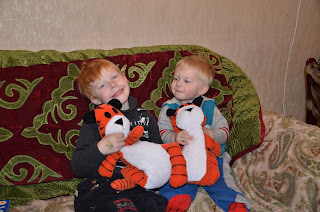 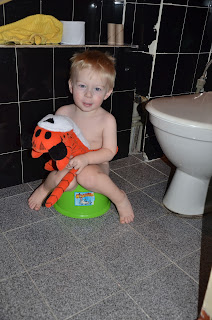 Everywhere.
Now that it's winter vacation, we are spending quiet days at home, playing with new toys, reading new books, eating a lot of pancakes, and enjoying the snow in the afternoons. 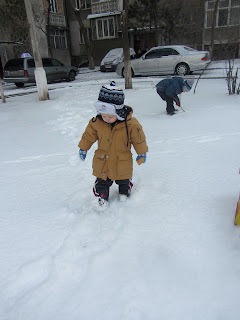 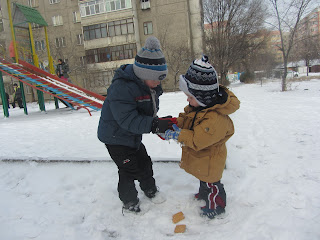 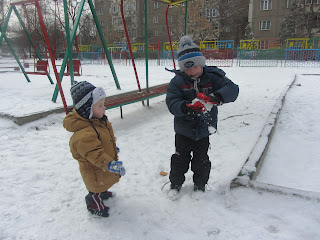 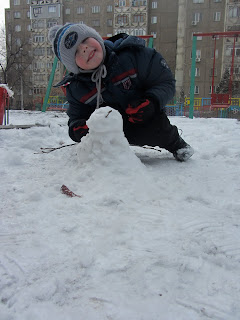 There's not a lot of snow to work with, but Misha managed to create a small snowman! 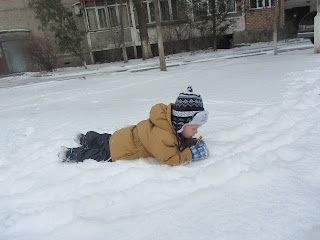 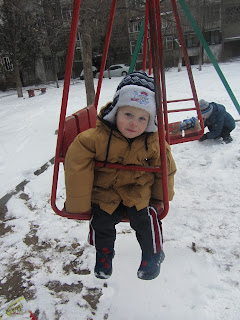