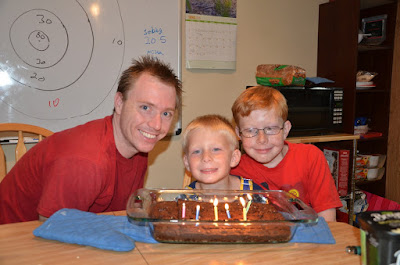 Sebby turned six this summer, on June 20. For his big celebration, we decided to take a family trip to a real water park, something the boys have never done before. We drove into Houston to play at Splashtown for the entire day - riding a group raft through twisting tunnels, playing on the pirate ship and in the wave pool, and - best of all - swimming along in the current of the Lazy River. There was a period of thunderstorms in the middle of the day, during which no one was allowed to do any of the rides, but the kids had so much fun that the rain was quickly forgotten.

Due to the nature of water parks, we didn't have a camera on us for most of the day. However, I did get this nice shot of the boys in the car on the drive home: 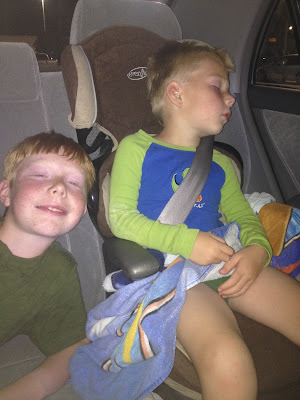 On, around, before and after his birthday (who can remember?), Sebby enjoyed opening his gifts. 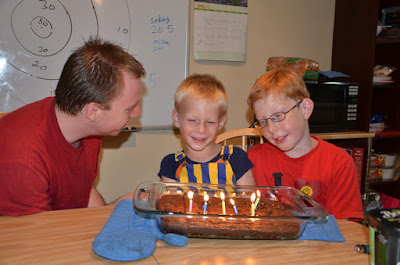 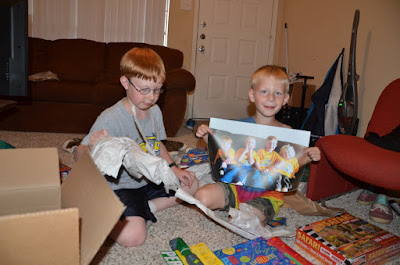 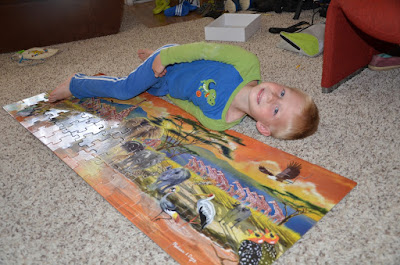 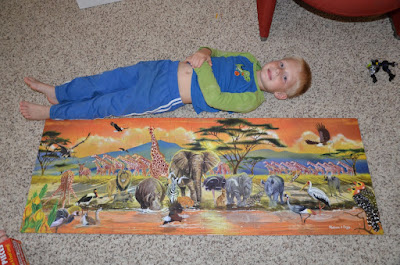 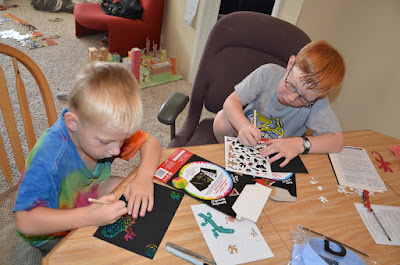 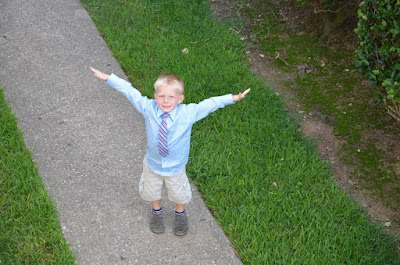 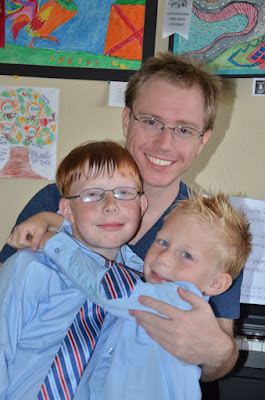 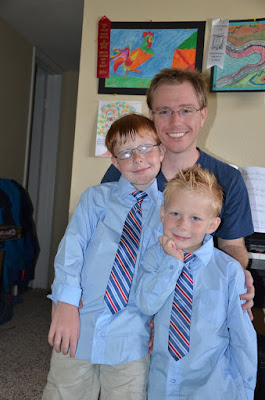 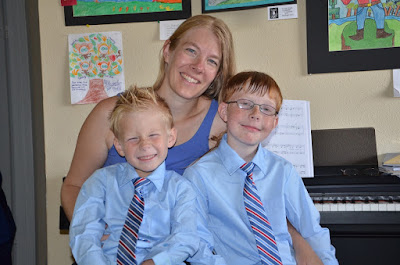 I've been collecting a list of cute sayings from the boys, stretching several months back. Here you go!

"I like the slime kind" - Sebby, talking about "lime" yogurt.

Misha was reading a heading aloud from a science textbook: "What is 'force'?" Sebby immediately responded, "You know what the Force is! Remember Star Wars??"

We passed a cement truck with its spinning barrel, and I asked Sebby if he knew what it was for. "It's like sidewalk all mixed together," he said. "Kind of like frosting."

"Don't wipe your hands on your shirt!" we always warn Sebby as we see his hands headed for his newly-donned clothes. "I didn't!" he protested one day. "I wiped them under my chair!"

One evening, I asked the kids if they wanted to play a game (as we often do). On this particular day, involved in an adventure with Misha, Sebby answered politely, "Well, we're playing dragons, but you and Daddy could play Uno or something."

Sebby learned how to swing on the monkey bars this summer - something he has been trying to do for quite some time so he could be like his big brother. After an evening of monkeying back and forth, he examined his smarting hands and said in great joy, "Misha, look!! I got the blisters!"

During our visit to Kent and Connie's farm (more on this coming soon), we had the wonderful chance to see their goats. I asked Sebby if he knew what a baby goat is called. I could see him visibly concentrating, trying to remember. "Oh yes, yes, I know! It's called .... a child!" He was *almost* exactly right. :)

We learned a while back that by age 20, the average person has already lost half of their taste buds. At some point this summer, when we were eating some delicious cherries, we encouraged Sebby to try them. He didn't like them, but he wasn't too worried about it, saying, "Maybe when I grow up - when I lose some of my taste buds."

As for Misha, he continues to make us smile with his vocabulary. For instance, he saw a cockroach crawling up our wall and exclaimed, "Oh no, it's dreadful!" Another time, when I asked him if he wanted some tuna, he replied rather archaically, "Yummy, yummy, indeed! I think I shall!"

When I bought new mouthwash, Misha asked, "Can I gurgle with this?"

We rarely go out to eat, so common restaurant names are not particularly familiar to our kids. When we stopped recently at Taco Bell (on the way to the water park, in fact), Misha kept asking for ice cream. I told him I didn't think Taco Bell really featured ice cream, but he insisted, saying we had even taken an ice cream tour there. Then I realized he was talking about the Blue Bell ice cream factory.

Every so often, we find that Misha has some unexpected gaps in his knowledge, due to going to school in a foreign country from ages 5 to 8. For instance, a little while ago we discovered that he couldn't name all the months in order. Sebby was only too happy to teach him the "Months of the Year" song that he had learned in kindergarten!

Sadly, our betta fish (affectionately called Alpha) leaped to his death from his too-full fish tank. Shortly after, I found the fish in a ziplock bag full of salt. Misha informed me that he was mummifying him. May he have a happy afterlife!